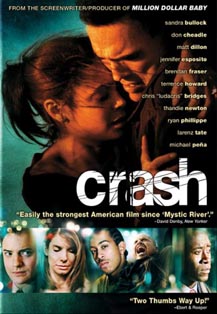 Untitled Document On Tuesday evening, Nov.29, the ArcLight Cinemas in Hollywood will host a special screening of Crash. The film, which is so far one of the most critically acclaimed pieces this year, marks the directorial debut of Paul Haggis, who wrote and co-produced last year’s Academy Award-winning film, Million Dollar Baby.

In Crash, which stars an eclectic mix of Hollywood actors including Matt Dillon, Thandie Newton, Don Cheadle, Jennifer Esposito, Brendan Fraser and Sandra Bullock, a handful of different stories about several Angelinos are brilliantly connected following a terrifying car wreck in Westwood. The lives of these assorted people collide after the crash (hence the film’s title), and everybody’s reactions become a reflection of their own fears and racial stereotypes.

Haggis, who will be the focus of an intimate Q&A session following the 7:30 p.m. screening of the film, says that he drew inspiration for Crash after an incident during which his car was stolen at gunpoint. Haggis will also be joined by Crash writer/producer Bobby Moresco, as well as a few of the film’s cast members.

ArcLight Cinemas is located at 6360 W. Sunset Blvd. (between Vine and Ivar, with DeLongpre to the south), in Los Angeles. Parking is available in the garage adjacent to the theatres. Self-park entrances are off Ivar to the west, DeLongpre to the south and off Sunset, just east of the Cinerama Dome. For more information or to purchase tickets for this screening, visit www.arclightcinemas.com.