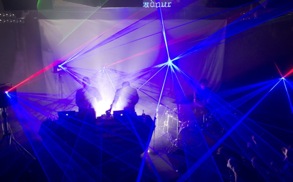 DJs and producers may be the rock stars of today’s music industry, but there are few that really rock when they step on stage. For that very reason, electronic dance music group Savoy remains in rare company.

It was only a few years ago, in fact, that Ben Eberdt, Gray Smith and Mike Kelly formed a jam band while attending the University of Colorado at Boulder.

But despite eventually abandoning its jam band roots for the EDM world, the Brooklyn-based outfit hasn’t lost that rock element when performing live. Part of it has to do with Kelly staying on board to play drums, but it’s also because Eberdt and Smith know a thing or two about music theory.

Maybe that was the Troubadour’s justification in booking the trio for a Friday night gig on their “Savoy Live with Lasers” tour rather than packing the pint-sized room with a bunch of metal heads. If Guns N’ Roses or Mötley Crüe had just happened to be at the historic nightclub that evening, they probably would have been cross-eyed by 11:15 p.m. — unless they brought sunglasses with them (just take a peek at some of the photos, and you’ll quickly see what I mean).

With an army of laser beams penetrating our retinas, Savoy served up a plate full of bass and then dished out a second helping not long after. And the college kids who comprised most of the astonishingly half-full crowd — tickets were still being sold at the door — ate it right up, one bite at a time.

If there is only a handful of electro acts oozing with arena rock flavor (think Justice), then Savoy is certainly one of them. While there was more than enough bass for dubstep fans to feast on, there was also plenty of rock-tinged electro house to make you want to head bang like you’re at your first Nirvana show. You get that feeling from the opening track (“Bridge”) of Savoy’s latest EP, Personal Legend, which was featured prominently during its high-energy, 90-minute set.

Yet, as Savoy’s sound has evolved over the years, its work with other artists remains one of its most promising ventures to date. Whether it’s been collaborating with singers like Sofi Bonde and Heather Bright, or teaming up with Dominic Lalli of Big Gigantic to produce “AfterShock,” the trio continues to explore its sound in new and different ways. For instance, its remix of Laidback Luke’s “We Are the Sun” that features Bright on vocals was particularly stimulating as the night wound down.

It’s no wonder why Savoy emerged last year to earn its own headlining show at Red Rocks Amphitheatre and a spot on the bill at Jay-Z’s Made In America Festival.

Things haven’t slowed down recently, either. After all, not only has Savoy released two EPs in the last five months, but it’s also nearing the end of its first tour in 2013.

So, although a return to L.A. may not come any time soon for Eberdt, Smith and Kelly, this is one EDM act that keeps proving it doesn’t need guitars and whammy bars to still shred.