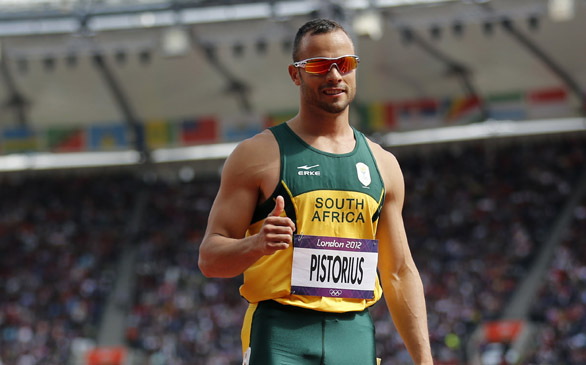 As his girlfriend, Reeva Steenkamp, cowered behind a locked door in a tiny bathroom, Oscar Pistorius strapped on his prosthetic legs, grabbed his pistol, strode seven yards to the door and fired through it four times, killing her, prosecutors alleged Tuesday as they laid out their case against the double-amputee Olympic runner in Pretoria Magistrate's Court.

But in an affidavit read in court, Pistorius said he was deeply in love with Steenkamp and denied any intent to kill her. "I know she felt the same way," he said in the document.

As the affidavit was read, Pistorius wept so bitterly that Chief Magistrate Desmond Nair had to halt the proceedings to allow the athlete time to compose himself.

But in a major blow for Pistorius, Nair agreed with the prosecution, ruling that for the purposes of Tuesday's bail hearing the charge against Pistorius was premeditated murder, a decision that will make it difficult for him to be granted bail.

Under South African law, those charged with a category six offense, the most serious category, must show exceptional circumstances as to why they should be released on bail.

Pistorius may now face months in jail before his trial. If convicted of premeditated murder, the 26-year-old Pistorius, who inspired the world by overcoming adversity to compete in the Olympic Games in London last year, faces life in jail.

The hearing took place at the same time as Steenkamp's family was holding a private funeral for the model.

Though Tuesday's proceedings were a bail hearing, some of the main contentions of the prosecution and defense cases were aired.

Pistorius wept through much of the hearing, while his brother, Carl Pistorius, put his hand on the athlete's back in a gesture of comfort. Asked by Nair if he understood the arguments being made, Pistorius replied in a soft, clear voice, "Yes."

Pistorius' defense attorney, Barry Roux, denied there had been any murder, and the runner's family has made it clear that he will plead not guilty when his trial begins.

Roux argued that the killing was not premeditated. "It's not even murder. There's no agreement there, not even concession that this is murder," he said, adding that there were many cases of men shooting their wives through doors, mistaking them for robbers.

In the affidavit, Pistorius said, "I deny the allegation in the strongest terms. Nothing can be further from the truth. I fail to understand how I could be charged with murder, let alone premeditated ... as I had no intention to kill my girlfriend."

According to his version of events, the couple had a quiet dinner on Valentine's Day, and he watched TV with his prosthetic legs off while she did yoga. Then, they turned in.

During the night, he said, he went outside to the balcony to get a fan - without his prosthetic legs - and heard noises in the bathroom. It was pitch black, and assuming a robber had gained entry, he felt horror and fear sweep through him, he said.

Feeling vulnerable without his prosthetic legs, he said, he grabbed his gun from under his bed, screamed out at the intruder and opened fire through the toilet door, yelling at Steenkamp to phone the police.

It was only after he returned to the bedroom and saw that she was not in bed that he realized it must be her in the toilet, he said.

According to Pistorius, he broke down the bathroom door with a cricket bat and carried her downstairs.

Nel said there was no evidence available that supported the athlete's contention that he thought Steenkamp was a burglar and shot and killed her by mistake.

"There is no possible information to support his version that it was a burglar," the prosecutor said.

But even if he had made that mistake, Nel argued, it would still have been a premeditated murder because he shot through the door into a tiny room, measuring no more than 16 square feet.

He said the couple had argued and that Steenkamp fled to the toilet, seven yards from the bedroom and locked herself in.

No one would fire into a room of that size hoping to merely scare off a burglar, Nel said, adding that the motive of shooting in that fashion was to kill, because there was no way for Steenkamp to escape the bullets.

"She couldn't go anywhere. You can run nowhere," Nel said. "It must have been horrific."

"If I arm myself, walk a distance and murder a person, that is premeditated,' he said. "The door is closed. There is no doubt. I walk seven meters and I kill. The motive is 'I want to kill.'"

Nel argued that up until the moment he shot her, Pistorius' plan was to kill Steenkamp, although afterward he might have regretted his actions.

Later, he carried her body downstairs, leaving a trail of blood, prosecutors said.

The main focus of Tuesday's dramatic court hearing was whether Pistorius' actions amounted to premeditated murder, the most serious category of homicide, requiring Pistorius to show exceptional circumstances to justify his release on bail. If the defense had succeeded in persuading Nair that the case merited a less serious charge, Pistorius' chances of getting bail would have improved.

The prosecution's plans for the case apparently were leaked and have been widely aired in South Africa, where there is no jury system. Magistrates and judges are seen as able to judge the merits of a case without being swayed by media coverage.

As Pistorius' bail hearing unfolded in Pretoria, Steenkamp's coffin, draped in a white cloth and decked with white flowers, arrived at the Victoria Park crematorium in the coastal city of Port Elizabeth for a private funeral.

The case has divided South Africans, with people taking to social media to air their support or opposition for Pistorius.

After details of the prosecution case were reported in South African newspapers, major Pistorius sponsors Nike and Oakley began to distance themselves from the runner Monday. Oakley announced that it had suspended its contract with Pistorius, and Nike announced that it had no plans to use him in future advertisements.

Pistorius' manager, Peet van Zyl, Sunday claimed that sponsors would stand by the runner while the trial took its course. Oakley, Nike and other logos remained on Pistorius' website Tuesday, along with recent statements from his family and manager.

Reflecting the divisions the case has caused in South Africa, officials of the ruling African National Congress Women's League called for Pistorius to be denied bail. South African Minister for Women's Affairs Lulu Xingwana joined a group of ANC Women's League protesters outside the court Tuesday.

"It does not matter what standing Pistorius has in society," she said. "We want him to be treated like other criminals who have been charged with murder or abuse of women."