Jerry Buss is Praised Throughout NBA for His Vision, Humbleness 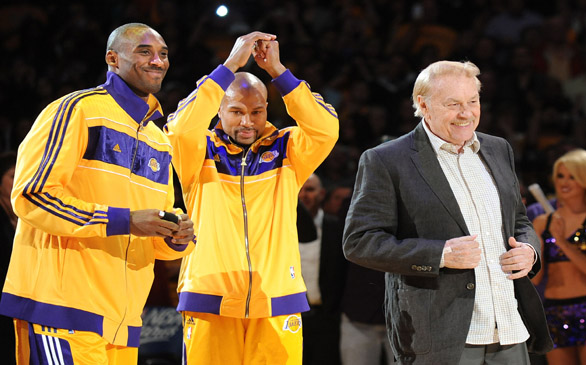 The death of Los Angeles Lakers owner Jerry Buss on Monday sparked an outpouring of support and respect for the man credited with the invention of Showtime and who figured out a way to make more money off of high-value seats. Buss, 80, died from complications of cancer.

Buss won 10 NBA championships after purchasing the team in 1979. In his first year as owner, after drafting Magic Johnson, the Lakers won the NBA title. It was a sign of things to come.

Among those helping Buss along the way was the legendary Jerry West. Buss was known for letting his basketball people run the show, which in the case of West was the way to go. West was general manager for five NBA championships in the 1980s and was instrumental in setting the table for the three consecutive titles from 2000-2002.

"This is an extremely sad day for me," West said in a statement. "As I have said many times, I have been blessed to work for Jerry Buss, the most successful owner in basketball history. His incredible commitment and desire to build a championship-caliber team that could sustain success over a long period of time has been unmatched.

"With all of his achievements, Jerry was without a doubt one of the most humble men I've ever been around. His vision was second to none; he wanted an NBA franchise that represented the very best and went to every extreme to accomplish his goals. His achievements as an owner are legendary and will never be duplicated: 10 NBA titles and 16 trips to the NBA Finals."

Kareem Abdul-Jabbar was on the five championship teams in the '80s.

Abdul-Jabbar, who had a 16-foot statue unveiled of him in front of Staples Center in November, recalled what Buss stood for.

"When someone as celebrated and charismatic as Jerry Buss dies, we are reminded of two things," Abdul-Jabbar said in a statement. "First, just how much one person with vision and strength of will can accomplish. Second, how fragile each of us is, regardless of how powerful we are.

"Those two things combine to inspire us to reach for the stars but also to remain with our feet firmly on the ground among our loved ones. Dr. Buss embodied that compassionate entrepreneurial spirit."

Byron Scott won three championships with the Lakers during the '80s. Now the coach of the Cleveland Cavaliers, Scott grew up in nearby Inglewood and remembers the Showtime days from the inception.

"Dr. Buss was an innovator," Scott said in a phone interview. "He had the Laker Girls. It was just some of the things he introduced to the NBA. With Showtime, all of a sudden we had actors and actresses come to see us because of the way we played, the style we played. Dr. Buss had everything to do with all of that. It's a sad day."

And with the celebrities came courtside seats and a demand for special seating for the suddenly upscale crowd that just wanted to be seen. Buss was glad to oblige at a price.

James Worthy, who also won three titles with the Lakers in the '80s, had this to say: "Condolences to the Buss family. Dr. Buss was not only the greatest sports owner, but a true friend and just a really cool guy. Loved him dearly."

"The NBA has lost a visionary owner whose influence on our league is incalculable and will be felt for decades to come."

"Jerry Buss was a visionary and a dear friend. Our city will miss him, our league will miss him and the Sterling family will truly miss him."

Former Laker Derek Fisher was a member of the last five NBA championships won under Buss.

"Today the world lost a visionary and one of the most successful sport figures of all time," Fisher said in a statement. "But today I lost a friend and mentor. He forever changed by life. May he rest in peace and my prayers are with his family that he loved so much."

Shaquille O'Neal expressed his thoughts through Twitter: "I'm deeply saddened over da loss of the great Dr. Jerry Buss. He was a dear friend, mentor, and brilliant business mind thank u 4 8 gr ... yrs."

Lakers center Dwight Howard never really got to know Buss well, but he expressed his sentiments, also on Twitter: "I want to share my condolences with the Buss Family as well as my teammates and the Laker family. I had the privilege to meet Dr. Buss when I joined the team. He was an extraordinary man who has left an impact on the sports world. His legacy will never be forgotten. Rest in peace Dr. Buss."