Lucha VaVoom: Not Your Average Night Out in L.A. 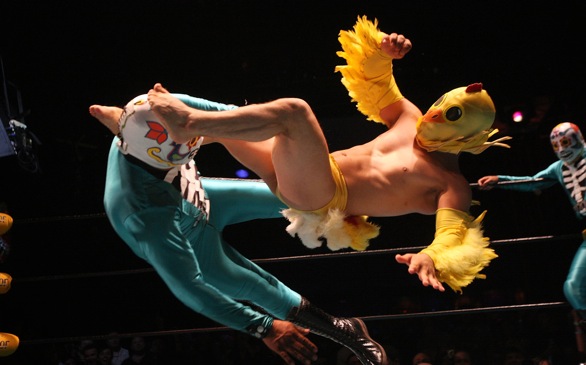 The Luchadores incorporate incredible wrestling moves in their fights against one another.
(Credit: Courtesy of Lucha VaVoom)

Variety shows are far and few between these days. It seems that you have to really look to find something that offers you more than just music, comedy or dance that isn’t Broadway-worthy. With that being said, the complete package that you will never see on 34th and Main is touring the world and made a two-day stop for Valentine’s Day in Los Angeles: Lucha VaVoom.

Lucha VaVoom is a combination of sex, violence and comedy. Burlesque performers take the stage to start things off. Stripping down to what kind of resembles a thong and some pasties, these women mesmerize the audience with skills that would make any acrobat envious. Suspended on ropes or spinning on poles, the action gets started very fast, and that’s just in the first 10 minuets.

These performers push themselves to the limit and offer something for every taste. Some are inked up, others are curvy, and some…well, some might not even be from this planet. It’s a show in every sense of the word because they play off the crowd’s participation and incorporate some pretty amazing props along the way.

The night itself is hosted by some of the funniest comedians out there, and they take their job very seriously. Encouraging yelling, drinking and just letting loose is part of the requirements bestowed upon the guys getting you from act to act.

Blaine Capatch is the main host of things, and you might know him from “Mr. Show” or “MADtv”. This year, the Sklar brothers, who you have seen in everything from national commercials to “Entourage,” joined him. They brandished witty, fast-paced crass humor to keep the energy going. Even comedy legends like Eric Idle of Monty Python and Drew Carey can be seen at the shows.

However, it’s the Luchadores that really make the show; they’re the reason why everyone comes out to attend. Some compare Lucha VaVoom to WWE or WWF, but instead of focusing on the constant drama between characters, this show is all about the action. Rivalries that embody good vs. evil take the stage at least fives times during the night to the roar of a 1,500-member crowd. The fights last much longer than you’d expect, and if you’re sitting in any of the ringside seats, you can expect to have a wrestler land in your lap at least once. This no-holds barred fighting shows off these performers’ athletic ability as well as the imagination of the team that put this event together.

From authentic Mexican wrestlers all the way to midgets and even an All-American wrestling hero circa 1973, this show has it all. Demanding that the audience stays involved, the match usually doesn’t end until the crowd is roaring to see one team lose.

In the end, there really is no better way to spend a night in L.A. that allows you to let loose and be entertained with not only slapstick action, but some truly witty banter and a bit of sex and violence.