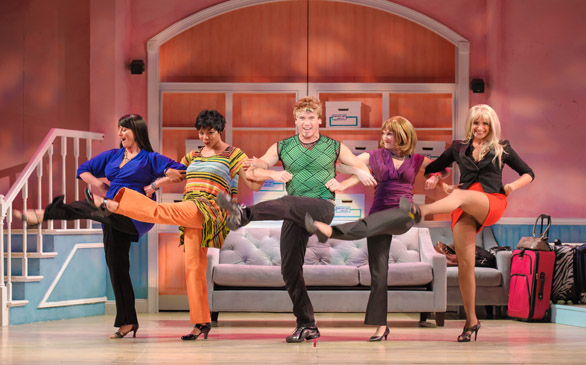 Mark Schwartz’s “Divorce Party The Musical - The Hilarious Journey to Hell…and Back!” is set to embark on a limited engagement from Feb. 26 through April 14 at the El Portal Theatre within the Arts District of North Hollywood.

The musical is making its West Coast Premiere a week from now. Schwartz, who also introduced the extremely successful “Menopause The Musical,” doesn’t hold back on how the concept for “Divorce Party The Musical” originated.

For this project, Schwartz collaborated with Dr. Amy Botwinick, author of Congratulations on Your Divorce -The Road to Finding Your Happily Ever After. Both created this fresh piece while Jay Falzone installed direction, lyrics and choreography.

“I met Amy and talked about it,” said Schwartz, a native of New York. “She had experience with divorce and had written a book about divorce, so we started working on it and writing it out. About a year after we had written the script, I brought Jay in; we had worked together before, and he's a very talented director, choreographer and lyricist. I always knew I would want him to direct and choreograph the show. And also for the most part, he wrote all the lyrics.”

Schwartz and Botwinick met at a function in West Palm Beach, Fla., through mutual friends. The chemistry among them, including with Falzone, is great, according to Schwartz. Since day one, it’s been a collaborative group effort.

But, just like in any other project, Schwartz faced challenges while formulating this musical.

“I think the biggest challenge was to come up with a concept that worked,” he said while noting that the challenge remains the same in all theatrical pieces. “You can have the greatest ideas in the world, but if you can't translate them through whatever medium you want to use, in this case theatre, then it won't work…We’ve gotten standing ovations at every single show we’ve had, so we know that the audience loves it. That's also always a challenge.”

Interestingly enough, the demographic in which divorce is most prevalent is people in their 30s, Schwartz said. “Divorce Party The Musical” deals with a woman getting divorce (around 33 years of age); Schwartz believes everyone will find it hysterically funny.

After all, the musical is based on a subject that occurs often all over the world.

“I think it’s going to be extremely successful,” he said. “It’s an audience show. We didn’t write Shakespeare. We didn’t attempt to write Shakespeare. We strictly wanted a show for the audience. People will come, and people will love it. It’s very 'in-your-face' funny, and very adult. It’s a fun experience, but also, it’s got a lot of realities in it that will make the audience reflect. These things happen.”

“Divorce Party The Musical - The Hilarious Journey to Hell…and Back!” runs through April 14 at the El Portal Theatre in North Hollywood. Performance schedule is Tuesday through Friday evenings at 8 p.m.; Saturdays at 2 p.m. and 8 p.m.; and Sundays at 1 p.m. and 6:30 p.m. For more information, click here.