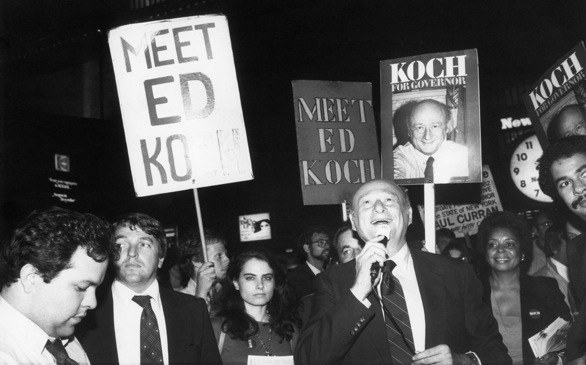 In Neil Barsky’s documentary Koch, you learn about the story of a man who loved the public life and adored being in the spotlight.

Ed Koch (who died on Feb. 1, 2013 at the age of 88) was the type of man that wasn’t afraid to say “no” when everyone else said “yes.” He was a fearless, outspoken political leader, lawyer, actor, comedian, but most of all, a dedicated New Yorker.

In one of the scenes, Koch reads the words off of his own tombstone: “He was fiercely proud of his Jewish faith. He fiercely defended the City of New York, and he fiercely loved its people.” This scene in the film is one of the more emotional scenes in which Koch reflects on his life.

In many ways, Koch could be seen as a romance between the former mayor and his beloved city. As a man who never married or had any romantic attachments, Koch’s true love was New York City. He gave his life to the Big Apple, and in return she gave him purpose.

Barsky’s film captures clips and commentary of Koch’s career from the beginning of the 1977 election up until his latest award of having the Queensboro Bridge renamed the Ed Koch Queensboro Bridge. Through telling his story as New York’s mayor, the film shows the mutually beneficial relationship between Koch and the city.

The film also highlights Koch’s accomplishments, including his public housing renewal program and winning his third election with 78 percent of the vote. However, it emphasizes some of Koch’s mistakes and provides his personal commentary reflecting the nature of those decisions. For instance, Koch describes how closing down the Sydenham Hospital was a bad decision because of the anger it aroused within the black community and the stain it placed on his administration.

Overall, this documentary tells the tale of a fierce personality that left a permanent legacy on New York. However, under the surface, Koch also tells an even more intriguing story of a public figure’s private life. The camera travels with Koch on his more personal events such as a Yom Kippur celebration with his family and friends. It shows the emotional vulnerability and humanity of a man who never allowed the public to see those sides of him.

Because of this, the film is not only an informative portrayal of a fearless political leader, but also a relatable story of a man’s emotional journey through changing times.