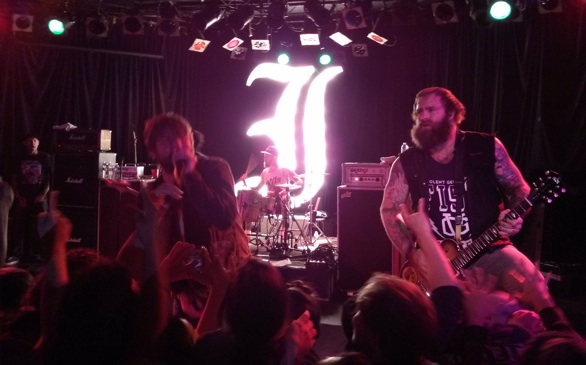 The lit-up shape in the background is the letter "I", which serves as the band's logo.
(Credit: Zach Bourque)

With their infamous blend of Southern fried metal and loud, fast hardcore music (which combined makes the super genre “metalcore”), Every Time I Die returned to Los Angeles on Feb. 17 for a sold-out show at the Roxy.

Even though their initial wave of immense popularity has subsided, the ecstatic crowd that was packed to the brim inside the famed Sunset Boulevard rock venue was unaware of that. It was difficult to get a good view of the stage without getting down into the trenches, where things opened up immensely as a result of the nearly permanent pit that kept things interesting.

Openers included Vanna and Hundredth, up-and-comers who kept the crowd moving and the noise level cranked to 11 for much of the evening. Neither stood to break any new ground in the “metalcore” genre. Regardless, it’s exciting to see new bands making new music while keeping the old guys employed.

The Acacia Strain’s immensely heavy music was the outlier that night. The bands slow, sludgy metal was not without rhythm, and if the wall shaking visible from outside of the venue was any indication, they were the heavy metal winners of the night. Eardrums all around weren’t the only ones getting pummeled, as wild animal-pit meisters threw down with fury, a trend that would continue throughout Every Time I Die’s hour-plus set.

And what a set it was. Marking the 10th anniversary of their acclaimed release Hot Damn!, the guys really had some fun on stage. Front man Keith Buckley has been doing his shtick up there for well over a decade, and it shows. The band’s energy was infectious as they played countless tracks off their entire discography, including several from Hot Damn! such as the anthem “Ebolarama,” among others.

The band’s unique blend of cheeky, intelligent lyrics and shamelessly wild live show was in full force as they rocked as hard as possible against the gigantic letter "I", which was lit-up and has served as their logo for as long as anyone can remember.

What might be most refreshing from the night was the fact that everyone was still excited to hear this music. Fans were literally wall-to-wall with older, 20-something people who grew up on this music among a sprinkling of younger, newer fans.

There’s a serious case to be made for loud, unapologetic rock shows like this, and anyone in attendance that night at the Roxy could testify to that case.