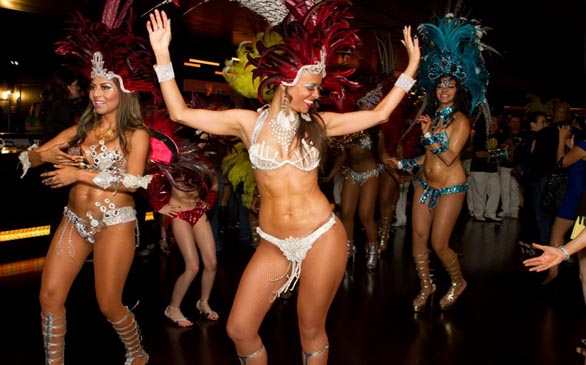 For the 13th time, Los Angeles will witness the Annual Brazilian Carnaval: Exotica, the longest running of any such celebration on the West Coast. The Carnaval features an All-Star Brazilian band, non-stop Carnaval music and dancing at L.A. Live’s Club Nokia on Saturday, March 2 from 8 p.m. through 2 a.m.

“My company is the oldest and biggest working with Brazilian culture, music and dance here in southern California,” she said.

Leao carries an entrepreneurial spirit. She’s also the owner of a family-owned restaurant, El Indio Mexicano, in Northridge. She said she took over about 25 years ago. Nevertheless, she’s held a passion for the Brazilian culture since the 1980s.

According to Leao, Brazilian Nites Productions originated out of the lambada, an exotic form of dance in Brazil, fever from 1989. While noting that she danced professionally, Leao’s connection with the South American nation grew stronger when she became highly involved with the film The Forbidden Dance, formulating after-GRAMMY parties and organizing club nights at a venue named Monaco in North Hollywood – all which took place in the 1990s.

“My main intention was to work more with Brazilian talent and have nights of special events,” said Leao, who is fluent in English, Spanish and Portuguese. “So in other words, I wanted to take it to the next level.”

But now Leao solely focus on the restaurant and Brazilian Nites Productions, which produces, organizes and promotes a variety of events yearly. That’s where the 13th Annual Brazilian Carnaval: Exotica comes into play.

Essentially, the event is a music and dance cultural gem for any aficionado. It’s a demonstration filled with Carnaval samba, costuming, dancers and audiences parading to live Brazilian music and a 100-person participatory drum circle piece. The Carnaval is appropriate for all ages.

One of the main acts is the All-Star Brazilian band. Leao, who attended UCLA for two years, believes the band brings a fusion of music to the night.

“They showcase a lot of the really good local artists. It’s not just one,” she said. “They are very well known performers. What we do is try to show the best of the Brazilian carnival, which is not just from Rio de Janeiro. It’s also from Bahia and other areas in Brazil. This band represents all these carnivals, and they also feature wonderful samba dancers with amazing outfits and choreography. And about 90 percent of them are Brazilian.”

The night will also have arts and crafts galleries people can visit. Attendees will also have the opportunity to consume Brazil’s national cocktail, caipirinha. Above all else, Brazilian chicken pies (cochinha), Brazilian-style hot dogs and Brazilian beef croquettes (kibbe) will be available for purchase as well.

“Overall, the show is an opportunity to get close to Brazil and its mesmerizing culture,” said Leao.