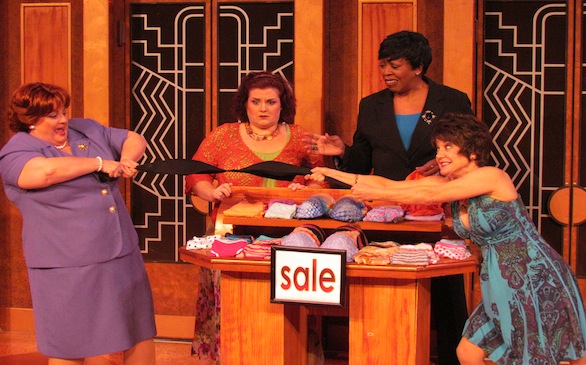 Nothing could be better than to end the month of February with three performances (Feb. 26-27) of the much-acclaimed hilarious parody, “Menopause The Musical,” at Alex Theatre in Glendale.

The show opens Tuesday at 7:30 p.m., but continues Wednesday with a matinee time of 2 p.m. before ending its short and sweet run with a 7:30 p.m. performance. Kathy St. George, a Boston-native, is part of the touring cast and she’s been on and off since 2004.

“In 2004, I went to the audition in Boston,” said St. George. “They said the show had had an enormous success elsewhere, and that we'd probably have a long run in Boston.” While in Boston, the show ran for almost two years, and it broke records, according to St. George.

St. George carries a compelling resume. She’s been on Broadway, as she appeared in the Tony-Award winning revival of “Fiddler on the Roof,” which was directed by Jerome Robbins. Additionally, St. George has seen theatrical action off-Broadway just as in the like of “I Love You, You're Perfect, Now Change,” another musical comedy.

St. George doesn’t hesitate to describe her character in “Menopause The Musical.”

“I play the Soap Star, and she's a soap opera actress who is terrified about aging and wrinkles and that she's going to be replaced by a younger actress," she said.

“Menopause The Musical,” set in a department store with women making fun of their menopause experience, features classic tracks from the 1960s, 70s and 80s.

“It's about four women who meet in a lingerie sale at Bloomingdales,” said St. George, who went on to say that this particular musical is a “wonderful gift.” “We’re fighting over a black bra at the sale and that's the beginning of these four wonderful characters bonding.”

The musical runs for about 90 minutes with no intermission. The cast sings songs, which are parody lyrics.

“Menopause The Musical” has three performances at Alex Theatre in Glendale. For more information, visit alextheatre.org.