SEXTING: Is it Really THAT Bad? 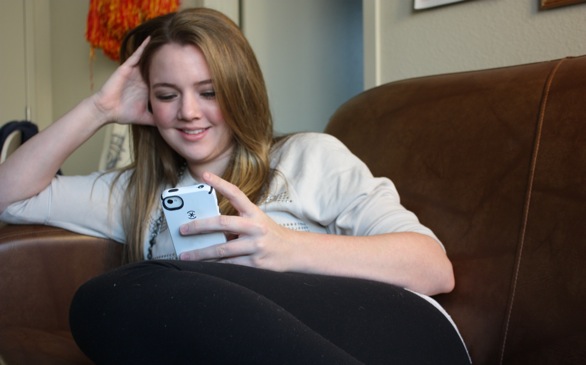 Sexting is not all bad; it adds excitement and thrills in relationships.
(Credit: Nicki Spencer)

These days, almost all of the articles that you read about sexting emphasize the negative implications of sending sexual material through the phone. And yet, despite the consistent warnings of the media, sexting manages to remain extremely common amongst college students because, when done properly, sexting can actually stimulate desire within a relationship.

A study conducted by the University of Rhode Island analyzed 200 students on their sexting habits. 78 percent of the college students reported that they received suggestive text messages, more than half have received suggestive images, and two-thirds of them admitted to sexting.

Why are so many college students partaking in an act that the media highlights as dangerous and stupid? Well, the media’s disapproving attitude towards sexting may be too extreme. When done in the appropriate context, sexting can actually be an effective approach to spice things up during the day. People like to have a saucy message on their phone to keep things interesting. It’s a nice way to let someone know that you are thinking about them… naked.

One communications student at the University of Southern California (who wishes to remain anonymous) attributed sexting to the success of her long distance relationship. “He’s studying abroad right now, so sexting helps us keep the fire in our relationship,” she described. “Since we can’t be together, you know, physically, we have to find some other way to be intimate.”

An astronautical engineering student at USC (who also wishes to remain anonymous) said, “I like sexting because I think it builds sexual tension between two people.” A lot of students think of sexting in a similar way. They use it as a titillating precursor to tonight’s inevitable romp; it is all-day foreplay.

Now, there’s an app called Snapchat that has possibly changed the daunting notion of a scandalous message being set in stone. The app allows you to share a photo with someone for up to 10 seconds and once the allotted time has passed, the photo is gone forever. The receiver can no longer look at it, their friends will never see it again, and even you will not be able to gaze upon it.

The CEO of Snapchat, Evan Spiegel, claimed that the app was never intended for sexting purposes. However, one CNN article stated, “In an age when young people are constantly being warned not to post inappropriate things online, Snapchat offers a degree of freedom by letting users share unfiltered thoughts or images without much fear of reprisal.” For this reason, much of the buzz about Snapchat involves sexting.

Even though sexting does provide students with thrills and exciting, it’s important to note that sexting does have its downfalls. After all, part of the reason for sexting’s bad reputation is due to the great number of minors (mainly teenagers) who partake in the act, which has lead many teens to have child pornography charges filed against them.

One article from Time magazine states, “The issue of younger people sending explicit images and messages via cell-phone is increasingly worrying.” Perspectives like this become validated when sexting becomes influential in eliciting bullying and suicide.

For instance, Jessica Logan from Ohio took her own life after her boyfriend leaked a nude photo of her as a reaction to their breakup. After the image spread to her high school, Logan endured bullying, isolation and depression that all contributed to her eventual suicide. Today, her parents are suing her daughter’s ex-boyfriend for the invasion of privacy and emotional distress.

According to that University of Rhode Island study, one-fifth of the people who had received sext messages eventually forwarded them to someone else without the permission of the original sender. Statistics like this make it easy to think twice before sending a scandalous photo; you can never know for certain whether or not that picture or sexy comment will be shared with others.

Obviously, the concerns raised by the media are valid, but they also ignore the many cases in which sexting results in fun sexual experiences for both parties. As long as you are mindful of the potential repercussions, sexting can be a good experience.

One precautious USC music major (again, anonymous) said, “I think sexting is fine as long as you are smart about it,” and she quickly added, “It is important to remember that anything written down or a photo can last forever.”

College students are definitely sexting, and this phenomenon of sending sexually explicit messages via cell phone will be around for a long time.