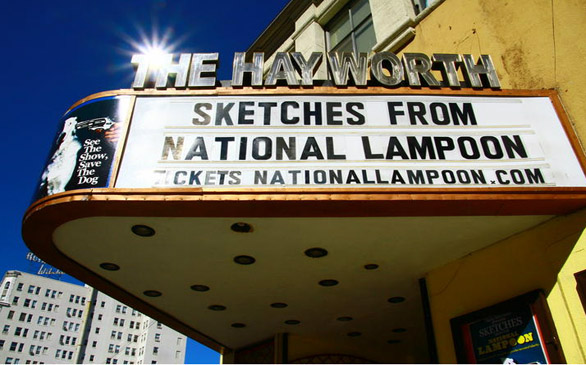 ABOUT THE NATIONAL LAMPOON – A BRIEF HISTORY

First, let's get this dog thing out of the way. The National Lampoon magazine cover featuring a dog with a gun to his head and the printed warning: "If You Don't Buy This Magazine - We'll Kill This Dog" was selected by The Art Director's Society of America as the "best magazine cover ever." It has certainly become the most popular.

The sketches and monologues in the new revue, “Sketches From the National Lampoon,” were written by many of the legendary humorists for the Lampoon magazine and its radio, recording, stage and film productions.

Much of the material was written by teams of writers, sometimes as many as four or five, occasionally, just one solitary funny individual.

The list of writers, actors, directors and editors who worked for the Lampoon would take more space than available here and then we’d accidentally leave some out so we will, with apologies to those unintentionally left out, list some.

The Lampoon was created in 1970. Its founder and CEO was Matty Simmons, who has produced “Sketches.” He ran the company for more than 20 years, selling control in 1990. In the two decades that followed, the magazine closed but a number of films were produced under the Lampoon banner, including van Wilder.

Now, new management, under the supervision of Jerry Daigle, CEO and Alan Donnes, President, there has been a Renaissance. A full-length documentary on the Lampoon will be in theaters sometime this year and films and other projects are in the works.