USC's Matt Barkley Wants to be No. 1 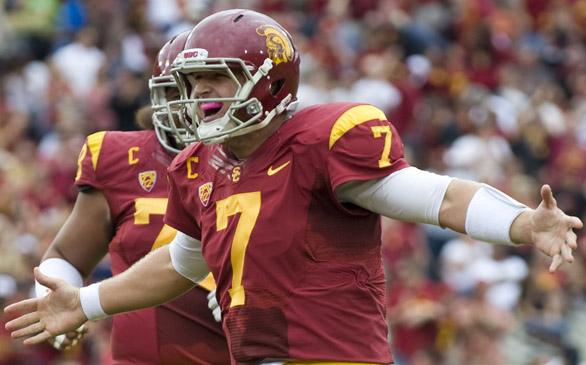 It's a coincidence, a product of alphabetical order, but it's also a statement, emblazoned in bright white script on his sturdy chest:

That number and those letters on the front of Matt Barkley's turquoise-and-black Under Armour T-shirt aren't just his NFL combine ID – they're his lingering NFL draft goal.

The quarterback from Mater Dei High and USC aims to be the first quarterback chosen in the April draft, no matter the knocks against him. Whether that makes him a first-round pick remains to be seen. But Barkley took the first step toward re-establishing his place in the QB pecking order by confidently addressing any and all criticism during a 17-minute media session Friday.

Asked if he views himself as the best quarterback in the 2013 class, Barkley didn't hesitate.

"I believe I am," he said. "I don't think you can go into the draft not thinking you are. I definitely believe I am."

That is not the consensus among draft analysts at the moment, and nothing Barkley does here will change that. He will not work out with the other quarterbacks Sunday, preferring to give his sprained throwing shoulder another month to heal. He said, cleverly, that he is "100 percent on track" to throw at USC's March 27 pro day. It'll be his first public passing performance since hurting the shoulder Nov. 17 vs. UCLA.

Which isn't to say he can't make up ground at the NFL's so-called "Underwear Olympics." Barkley came in at 6-foot-2{ Friday, at least a half-inch taller than expected. That measurement dispelled one of the concerns about him. It also proved that if football is a game of inches, the combine is a game of fractions of inches.

Barkley also has bigger hands than the taller Tyler Bray, Mike Glennon, Landry Jones and Collin Klein, and the similarly sized Geno Smith and Tyler Wilson – all the better to grip the ball in bad weather and hold onto it when defenders are trying to jar it loose.

Consider those dimensions the first first down for Barkley in his effort to win the offseason.

"There's always something to prove," he said, "and I'm out to prove something."

This particular Barkley mission involves proving what he is and what he isn't.

Barkley is the most experienced and mentally prepared quarterback in this draft, as the teams that interview him this weekend quickly will learn.

"Once those formal interviews kick off, I definitely believe that's a strength of mine in terms of being on the board, watching film," Barkley said. "I'm a master of my offense. I think I can portray that to them. Once they meet me, I feel like they'll have a good impression."

Barkley is not, as a former colleague once wrote about Chad Pennington, some noodle-armed passer lacking an NFL-caliber fastball.

When a reporter informed him that some believe his arm is weak, Barkley drew big laughs with a defiant three-word reply: "I would disagree."

There's no disputing that Barkley did not perform as well in 2012 as '11, weakening his once-robust draft stock and making his decision to return for his senior year look like a mistake. He threw only three fewer touchdown passes in one fewer game but more than twice as many interceptions.

Barkley did not have a viable explanation for the falloff, saying only: "There's going to be some years when it just doesn't click and things don't go as planned. This was just one of those years."

Kiffin believes Barkley "definitely" is worthy of a first-round selection. Kansas City owns the first pick and desperately needs a quarterback, but none of the QBs in this class has that high a grade. The more likely scenario, as of now, is a team such as the Chiefs or Arizona Cardinals, who pick seventh, trading into the latter half of the first round to snag Barkley or Smith.

As long as that's the order of things, Barkley will get his wish.