Luis Enrique Continues to Blossom As The Prince of Salsa 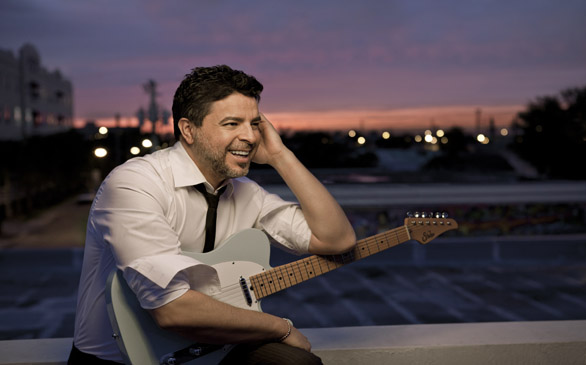 Luis Enrique, a former resident of L.A., is a salsa singer of Nicaragua.

Luis Enrique could’ve selected another passion, another profession. But his practice as both a singer and composer within the music genre of salsa has forever been a part of him.

Born and raised in Nicaragua, Luis Enrique began his quest to stardom in the 1980s. Interestingly enough, that generated directly from Luis Enrique’s family. With a quick laugh, he said he didn’t have much to choose from.

“Most of my family are musicians,” he said. “I was born into a very musical and artistic environment. Ever since I was very little, I was completely captivated by playing instruments, by singing and by dancing. I would say, every since I was 5 years old, I knew that this is what I wanted to do.”

Following his dreams, Luis Enrique relocated to Los Angeles in 1978 – a city he holds a lot of respect for and one where he’ll perform on Thursday, Feb. 28 at the Conga Room in downtown L.A.

“That’s where I took my first steps as a musician,” he said. “For me, it represents the start of several facets of my life. It’s where my fans have been following my career from the start. To me, every time I come back to Los Angeles is like coming home.”

But what can the audience expect from the upcoming show, and how does he feel about performing in such a respectable venue?

“Mainly, they should expect lots and lots of music,” said Luis Enrique, who now resides in Miami. “The repertoire from the show will cover pretty much my entire career – from the first material that was successful to the most recent material. It’s going to be a show full of energy, in which I will be giving my all. I think playing at the Conga Room is like playing at a house where all tropical music performers have passed through; it’s an incredible feeling to be there and perform there. Without a doubt, it’s going to be a very special evening for me, and anyone who comes to watch the show.”

Since his first album, Amor de Media Noche (Midnight Love), release in 1987 to his latest work in Soy Y Seré (I Am and I Will Be), it’s evident that Luis Enrique’s catalogue has blossomed. At the beginning stages of his much-respected career, the Grammy-nominated tune “Amiga” (Friend) and “Date Un Chance” (Give Yourself a Chance) cemented his mark within not only the genre, but in the music industry as well.

After an almost five-year absence, the Nicaraguan returned to the music scene with Dentro y Fuera (In and Out) in 2007. However, his 2009 release of Ciclos (Cycles) cultivated an immeasurable amount of positive feedback from fans, peers, colleagues and critics.

For Ciclos, which contains the acclaimed hit “Yo No Sé Mañana” (I Don’t Know Tomorrow), Luis Enrique earned several recognitions including two Latin GRAMMYs and the GRAMMY for Best Tropical Latin Album.

As of right now, Soy Y Seré provides another sample to Luis Enrique’s flourishing work. The project includes “Descontrólame” (Make Me Lose Control). This rather romantic, yet up-tempo track’s video was filmed in the Caribbean.

“The video is great,” he said. “The reason I did it in Cuba was because of the story and how each scene would develop. The song was already rich lyrically. I had the good fortune to work on it with Monica Velez, so I needed a video that gave me energy and brought a fresh perspective. All these things were achieved mainly because of Alejandro Pérez, who directed the video. I am very happy with what’s come out of this song, and I feel it’s the perfect way to wrap the album up.”

Luis Enrique, who enjoys reading and going to the movies, added that his current tour would end come March in his native Managua, the capital city of Nicaragua. However, his agenda has other prominent plans.

“We’ll also be recording a live concert that we’ll be releasing to the public next year,” he confessed. “It’s a celebration of my 25-year career. A lot of friends and guest stars will be featured in that show. We also plan to tour South America and, hopefully, Europe in the coming months.”

Despite his past, current and ongoing success, Luis Enrique sports a humble demeanor. His fans come first, especially when it comes to social media – a phase he vigorously considers vital since it wasn’t present in the ‘80s.

“Without a doubt, it’s the most important aspect of my career,” he said. “Nowadays, we’re fortunate enough to have these tools at our disposal – tools that did not exist at the beginning of my career. Back then, it was next to impossible to really know who your fans were, especially on an international level. So to me, it's extremely important. I like being able to, most of all, read what my fans are thinking, what their questions are; I like being able to answer those questions and really getting to know what my fan base is like.

On Twitter (@LuisEnrique), The Prince of Salsa carries more than 435,000 followers while maintaining a solid fan base through Facebook (Facebook.com/LuisEnriquePage) with more than 199,000 fan likes.

“I think it’s both a lovely and important interaction to have. It’s something I thoroughly enjoy. It never seems like work to me. I see it as part of enjoying my career and what I do.”