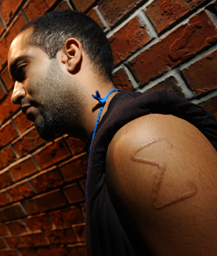 Untitled Document Branding has long been a form of body art, and in the past century it has emerged as a tradition among some black fraternity and sorority members. Some Greek organizations have policies banning the practice; others don’t prohibit it, but don’t condone it, either.

Fraternity brothers say it comes down to an individual choice of expression.

The practice of branding dates back thousands of years, says Sandra Mizumoto Posey, a folklorist and professor at California State Polytechnic University who has researched the subject.

Branding is most commonly associated with slaves and cattle. But secret societies and religious orders, such as those in ancient Greece, also used brands throughout history to mark followers, Posey says.

As for the college Greek system, the earliest recorded incidence dates back to 1931, but because of the secretive nature of fraternities and sororities, it is difficult to determine an exact timeline, Posey also states.

Although the practice is associated with black fraternities, there are exceptions. President George W. Bush is rumored to be branded with a symbol of his Yale fraternity, Delta Kappa Epsilon.

Members acquire brands for a number of reasons. Brands can display a sense of belonging, a mark of the successful completion of a challenging pledgeship. And they can be a symbol of manhood, of toughness.

"It’s an indication: ‘I am a member, I’m proud of that fact,’" says Tamara L. Brown, editor of African American Fraternities and Sororities: The Legacy and the Vision, a book that features Posey’s research on branding.

Brands often appear in discreet places such as the chest or the left upper arm. But when they are visible, bearers often display them with pride. Posey points out that on the cover of the sports book Rebound: The Odyssey of Michael Jordan, Jordan appears shirtless, showing off his Omega brand.

Ricky L. Jones, a University of Louisville professor and author of Black Haze: Violence, Sacrifice, and Manhood in Black Greek-Letter Fraternities is a member of Kappa Alpha Psi, has two Kappa brands: one on his left arm and one on his chest. "I saw it as something nothing more damaging than a tattoo," Jones says.

A brand is different in character than a tattoo, however.

It is achieved when a hot iron or piece of metal – often a hanger shaped like a Greek letter – is pressed to the skin for about 10 seconds. A wound forms in the shape of the metal and eventually becomes a scar, explains James Spencer, a dermatologist and professor at the Mount Sinai School of Medicine in New York.

No treatment can completely erase a brand, Spencer says.

And in doing so, there’s a risk of infection and keloids, puffy scars that are a particular risk for African-Americans, remarks Spencer.

In fraternities, a brother usually performs the branding, and it is sometimes a ceremonial event. Members say it hurts, for sure, but opinions on the pain level range from excruciating to a little sting. Some say tattooing is more painful.

Most fraternity brothers say branding is voluntary and hazing researchers say they haven’t heard of involuntary instances. Still, even some fraternities dislike the practice

"We frown on it," says Tyrone Patton, international grand executive secretary for Iota Phi Theta, a black fraternity. "Why would any human being sit still and allow someone to burn and sear his flesh with a hot iron?"

Fraternity brothers counter that the brand reflects loyalty to their organizations.

The brand "represents the lifelong commitment to the ideals of the fraternity," says Madison, who received his brand at the beginning of the semester. "It makes me feel like I’m closer to living what our fraternity stands for."