Universities Reach Out with Upscale Dorms 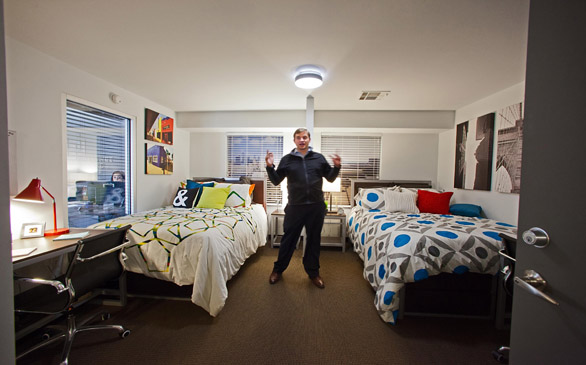 But behind both loaded dormitory towers now being built for students drawn to these popular urban schools - and for their demanding parents - is a common goal: an ingathering from the neighborhoods, a reinjection of residential life on campus.

"These are schools whose time has come," said Bob Francis, Drexel University's vice president of university facilities. "We're trying to unburden the residential communities around us."

"Urban schools are hot, cities are hot," said Jim Creedon, his counterpart at Temple University, where a 27-floor tower is under construction on Broad Street near Cecil B. Moore Avenue. "Students want to live a certain way. Neighbors are clear they don't want Temple to grow out."

At colleges across the Philadelphia region, administrators are rushing to keep up with the dorm race, including Haverford College, with dorms designed by the architects who designed the Barnes Foundation; Franklin and Marshall College, with its New College House; and vast upgrades at Villanova and Shippensburg universities.

But at the buzzed-about urban schools, a national trend that has put schools like Northeastern University in Boston and Drexel atop many prospective students' college lists, the trend is clear.

High (in the sky) and on campus.

Towering above them all, at 33 stories, is the Grove at Cira South on Chestnut Street, a privately developed high-rise that will cater to students from both the University of Pennsylvania and Drexel. It is being built by Brandywine Realty Trust and Charlotte, N.C.-based Crest Campus Communities Inc., reflecting another trend: private companies doing near-campus student housing. Single rooms will start at $1,300 a month, with rooftop pool and fitness club amenities.

"It happened with bookstores and food services," Drexel's Francis said. "There are parts of universities that are not core operations that other people do better."

The 19-story Drexel dormitory tower, plus its two eight-story mid-rises, at 32nd and Chestnut streets will be part of a total reimagining of Chestnut from the river to 40th Street, he said, with new facades bringing retail out to the street to create a more dense, pedestrian-oriented city space.

It will also, Francis noted, contribute to the ongoing mission of "de-orange-ifying" Drexel - where a midcentury construction boom of low-cost orange brick gave the campus an aesthetically dubious you've-left-Penn branding.

"You're making the city walkable, livable," he said. "It was a suburban setback. Now, suddenly, you give it urban rhythm, character, and feel."

At Drexel, where applications jumped 8 percent last year to 41,209 and are expected to exceed that this year, about 4,600 of 14,500 undergraduates currently live on campus.

Francis said the surrounding neighborhood has seen a decline in owner-occupied housing to about 14 percent. In recent years, the city has sent inspectors to issue violations at houses with more than three unrelated people. (City code forbids more than that.)

The romance of the old, wild off-campus Victorian with the rickety porch filled with empty kegs may be something both students and neighbors would rather be done with.

Francis said the 850 beds in the new dormitories on Chestnut Street were leased out within two months, at per-student costs ranging from $792 a month (in 12 monthly installments) for a two-bedroom, two-bathroom for four students to $992 a month for two private bedrooms and a bathroom.

The total cost of the Chestnut Square apartments, done in conjunction with American Campus Communities, is $97.6 million - which works out to about $113,500 per student.