Justin Chon Goes Above and Beyond in 21 & Over 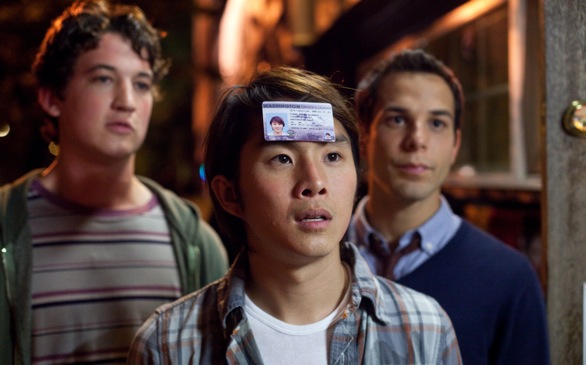 You’ve seen the trailers. You know, the one where a dude is standing on top of a police car doing the robot with pink panties and a bra on. Well, that dude is Justin Chon (from the Twilight series), and he’s starring in the film 21 & Over as Jeff Chang.

In 21 & Over, Jeff’s two best friends from high school (Skylar Astin and Miles Teller) visit him at college on his 21st birthday. Even though Jeff has a medical school interview the next morning, all three go out and get completely wasted. However, things turn ugly as his friends struggle to get Jeff home and also discover a dark secret about him.

In an interview with Campus Circle, Chon dished us details about the film.

Campus Circle: Can you tell us a little bit about 21 & Over?
Justin Chon: My character, Jeff Chang, it’s his 21st birthday, and he has a medical school interview the following day. His two dummy best friends come up to get him drunk for his 21st birthday. He refuses, but he agrees to have one beer, but obviously that one beer turns into absolute mayhem and chaos.

CC: What was your reaction when you found out you got the part of Jeff Chang?
JC: I was excited, especially for me being an Asian, an ethnic actor. These kinds of roles don’t come up too often. It was definitely an honor, and I was really excited to work with Jon [Lucas] and Scott [Moore]; they’re really great at comedy.

CC: Speaking of Lucas and Moore, what was it like working with the writers from The Hangover?
JC: They were great. I was really surprised as to how much freedom they gave us…You know, writers can be very particular about their work…so they don’t want you adulterating it by doing a bunch of improv. But…they didn’t care at all. We could take the script, do the takes for them, and then we could improv if we wanted to. They were just open to any and all suggestions, which was really refreshing and a lot of fun because a lot of the times we would come up with really cool stuff.

CC: Would you describe this movie as The Hangover for the slightly younger crowd?
JC: I do think there are similarities. It does happen over the course of one night. One difference is that The Hangover is in Vegas, and [21 & Over] is at a college campus…at the core of [21 & Over], it’s about friendship. Ours does have a lot of heart to it. These two guys that come over to take Jeff Chang out, they really do care about him, and you can tell. By the end of the movie, it’s really evident that they just want the best. Whatever he wants, what Jeff wants, is what they want. In that way, I think it’s a little bit more grounded than The Hangover…something like that could happen [in 21 & Over]…in that way, it’s really entertaining to watch; everyone is going to relate to it. Anyone who loves to party or is in college or has gone out with their friends will watch the movie and be like, “Oh, I’m Casey” or “I’m Jeff Chang.” We definitely have characters that are very relatable.

CC: In what ways are you similar and different to your character Jeff?
JC: I’m similar to Jeff in that I like to have a good time, and I really care about friendship. I really think that having long-term friends and having someone to lean on when things get rough is absolutely important in life. Everybody should have a few people like that…

The ways that we are different are my parents aren’t strict as the parents in the movie. My parents were kind of artists; my dad was an actor and my mom was a pianist. Growing up, they didn’t force me to over study. I wasn’t expected to go to college; they didn’t make me go. In that way, I’m different [from Jeff], and also…I’m not as much as a people-pleaser as Jeff is. Jeff really tries to keep the peace.

CC: What was the most challenging part about your role?
JC: …Figuring out the level of drunkenness I should be…that was actually quite difficult…I just did my research…did a bunch of Jägerbombs…(laughs).

CC: Did you in fact go out and drink to figure out how drunk you should portray Jeff Chang?
JC: I think I did that regardless of whether or not I was going to be in this movie, so it just happened anyways. But yeah – it’s actually pretty challenging to play drunk, to act drunk without being over the top...I also went on the Internet and watched a lot of drunk YouTube videos and kind of figured a little system to my drunkenness.

CC: Most people might recognize you from the Twilight movies. Has it been difficult separating yourself from that franchise?
JC: It’s funny because before Twilight, I was categorized in the whole Nickelodeon/Disney world. I did a short on Nickelodeon, so it was trying to break out of that, and then I finally did some other cool work. And then I got Twilight. So, it’s sort of been this whole other thing. But I don’t know – I’m not one of the vampires or wolves; I’m not one of the main leads or anything. So, it’s not really hard for me to break out of that because the focus isn’t on me. I don’t feel like I’m being type casted or anything.

CC: Do you have friends like Jeff Chang’s friends [Miller and Casey] in the movie…the kind of friends that sometimes get you into trouble, but they’re a lot of fun to be around?
JC: Oh, 100 percent. I have many friends like that. There’s just certain friends that you know if you’re hanging out with them, don’t even try to not drink because they’re going to force you anyway. I have a couple of friends like that…They pull out, “How long have we been friends for?” That kind of bullsh**.

Interviews
James Bond producer: 007 ‘can be of any color’ but never a woman
279 views