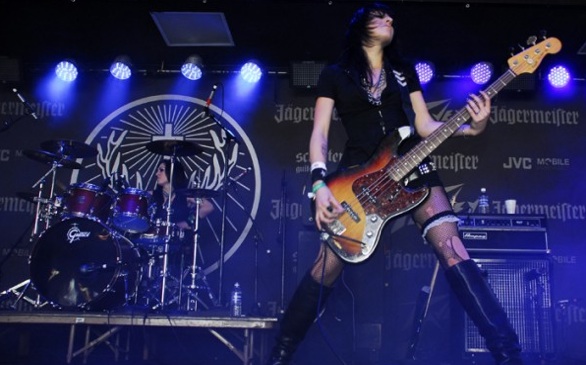 Music and tattoos are coming together in Orange County for a great weekend. On March 8-10, you’ll get the chance to experience MusInk's 6th annual tattoo convention and music festival.

Six years into the event, Bill Hardie (the festival’s founder) is happy to have such an impressive line-up ready for us this year, along with some amazing tattoo artists that will be working the event. MusInk 2013 will take place at the Orange County Fair and Events Center in Costa Mesa, Calif. The festival is set to have performances by Bad Religion, Pennywise, Reverend Horton Heat, TSOL, Lagwagon, The Vandals and Lucero and more, with appearances and work by more than 300 tattoo artists, including Jack Rudy, Robert Atkinson, Small Paul and Tomas Garcia.

Hardie wanted to create an event that didn’t go along with the stigma of tattoos. Before the first event, he had been involved in the tattooing and music industries and thought they should be combined into one spectacular festival.

“I went to tattoo conventions in the past, and they were dark and felt dirty, and the music just wasn’t really a part of it,” he said. “I decided to bring the music and tattoo culture together…they are such related cultures to begin with. I wanted it to be a place where you go and you feel like you are entering the Apple store…clean and perfect for tattooing but also music and everything for the people that might not be getting work done.”

If you enjoy music or if you like tattoo art, you will enjoy the weekend either way. However, punk fans are in for a special treat.

“This year is more punk than we had in the past,” said Hardie. “Last year was more of a KROQ show, and this year has an old-school punk vibe.”

Punk rock band Bad Religion, who is known for its live show performances and long reign in the punk rock and tattoo scenes, will headline Friday night. Pennywise will be helming the weekend when they play on Saturday, surrounded by the buzz of tattoo machines.

“I can’t choose a day that would be better to go than any other,” said Hardie.  “Bad Religion puts on a great show, and we were very happy to get them on the line-up this year.”

Music and tattoos have been connected in one way or another since the beginning. Though tattoos’ stigma is fading, their impact on music and music’s impact on tattoos are always apparent. In the past, many people have gotten additions to their ink at the festival, and there have been attendees who have not been involved in the tattoo culture as well. Hardie is happy to bring together the tattooed and the untouched in Southern California for the festival.

“Some people there, I’m sure, will be into the tattoo culture, but some people that go will be getting their first tattoos. Or some people will come just for the music,” he said.

Regardless of your involvement in the tattoo culture, MusInk 2013 will be a great way to spend a weekend, and just maybe you can get your first tattoo (if you don’t already have one, that is).