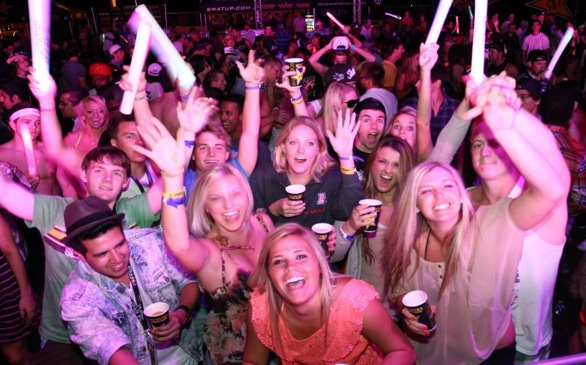 Forget the books; hit the beach! Spring is “breaking” out all over, and it’s time to get out of town and have some fun.

DAYTONA BEACH, FLORIDA
Daytona Beach has more than 20 miles of sandy shoreline to play on during the day, lots of nightclubs to party in after sundown and thousands of reasonably priced rooms to crash in when you need a rest. It’s also home to NASCAR theme park Daytona U.S.A., where you can see dozens of actual race cars and tons of racing memorabilia. And if you dare, for $134 you can take the Daytona Ride-along where you’ll roar around the oval track at Daytona International Speedway (with a professional driver) at speeds up to 160 mph. Daytona Beach is well known for having a Spring Break that never sleeps, so be prepared to be up all night.

SPECIAL OFFER: Purchase the Daytona Gold Card that’ll get you free admission and, in some cases, free beer at hot spots like Razzles, Ocean Deck Restaurant & Beach Club, 509 Lounge and Aqua Lounge. Available at the Daytona Welcome Center and www.daytonawelcomecenter.com

LAKE HAVASU CITY, ARIZONA
Motorboats, jet skis, inner tubes – you name it. If it floats, it’ll be out on Lake Havasu City’s portion of the Colorado River during Spring Break. If you want to drink out on the water, there are lots of “booze cruises” that allow you to indulge without running afoul of the law. On shore activities include bikini bull riding, Segway tours, ghost tours, pool volleyball tournaments and bowling. Pull into Kokomo Havasu (“the ultimate beach, surf and party bar”) for dancing and live entertainment. And London Bridge isn’t falling down; it’s one of the most popular places for a photo op.

LAS VEGAS, NEVADA
If a beach destination is not what you’re looking for, then Las Vegas is for you. The city’s famous “Strip” never sleeps, and it’s loaded with casinos, nightclubs, bars and wild attractions like the Big Shot Ride atop the Stratosphere Tower, which slings you 45-feet into the air from a platform that’s already more than 900-feet above the city. At the Fremont Street Experience downtown, you can dance to a disco beat or live music, guzzle big-ass beers as you pose with showgirls, see a phenomenal light show or even take a zip line ride.

SPECIAL EVENTS: Special events are an everyday event in Las Vegas, and you definitely won’t have a problem finding good live music on any given night. Cee Lo Green has a residency at Planet Hollywood, the Metal Alliance tour with Anthrax, Exodus and Municipal Waste lands at Mandalay Bay on March 23 and Maroon 5, Pennywise, Flogging Molly and Umphrey’s McGee are just a few of the bands with shows scheduled in March. Discounts on almost everything are widely available. www.visitlasvegas.com

PUERTO VALLARTA, MEXICO
If you want to be where the action is, head to Puerto Vallarta’s popular Los Muertos beach, adjacent to the downtown area and near the city’s malecon (seaside promenade) and famous “Romantic Zone.” If you’d like to get away from the crowd, no problem; Puerto Vallarta has more than 30 beaches spread out over 25 miles of Pacific coastline, and taxi rides to most of them are very cheap. The city has a large entertainment district with lots of places to dance, including the recently remodeled Roo and Punto V.

SOUTH PADRE ISLAND, TEXAS
Spring Break on South Padre Island is known as “the biggest beach party on the planet,” so you’ll have plenty of company whether you’re horseback riding, kiteboarding, skydiving, surfing or just building sand castles. Coconuts, Louie’s Backyard, Blanca Whites and Tequila Sunset are among the dozens of preferred after-dark party spots, and if you’re on a tight budget, there are campsites available nearby.