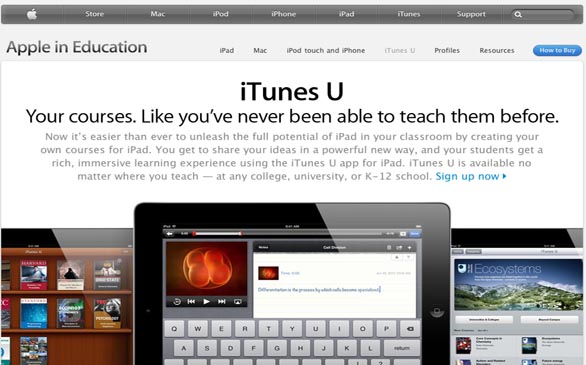 Apple announced Thursday that its iTunes U offering has surpassed 1 billion downloads, as online education becomes more accepted at schools in the United States and more popular worldwide.

ITunes U offers free educational content from colleges, libraries, museums and more that can help professors create materials for their courses, which can be offered to students using the same platform.

For example, Stanford University in Palo Alto, Calif. - which offered the first publicly available iTunes U site after joining Apple for the pilot project in 2004 - offers lectures from its courses, as well as course materials, faculty presentations, event highlights and more on the service. Apple singled out Stanford in its news release for being one of two entities to produce more than 60 million downloads on its own.

"With the incredible content offered on iTunes U, students can learn like never before - there are now iTunes U courses with more than 250,000 students enrolled in them, which is a phenomenal shift in the way we teach and learn," Apple software chief Eddy Cue said in Thursday's announcement.

Online education has become more accepted and widely used on college campuses in the past few years, as evidenced by the emergence of massive online open courses, or MOOCs, which offer education on the Web to anyone.

The system is beginning to garner wider acceptance. San Jose State University announced in February, for example, that it will partner with Mountain View, Calif.-based MOOC company Udacity for the first such courses to be eligible for college credits, offering three lower-level math courses for $150, a much smaller fee than such classes typically cost at the state university. Also in February, the American Council on Education recommended credit for four Coursera undergraduate math and science courses from Duke University, the University of Pennsylvania and University of California-Irvine; Coursera is also a Mountain View-based MOOC company.

ITunes U growth also showed a spike in recent years, as online education has become more accepted. The company announced that it had surpassed 300 million downloads on the service in August of 2010, a little more than three years after the service launched; less than three years later, it has added 700 million more.

A large percentage of that growth has come from overseas, with Apple saying Thursday that 60 percent of its downloads originate from outside the United States.

"Because of iTunes U, I have been able to introduce students and colleagues in China to research on the links between chronic multi-tasking, information overload and stress; discuss research publications and degree programs with students in Europe; and exchange information about the influence of neighborhood design on community levels of physical activity and obesity with students in Australia," UC-Irvine professor Dan Stokols said in Thursday's release.

Stokols reaches 170,000 students on iTunes U with a course in environmental psychology, Apple said.

(Katy Murphy of the San Jose Mercury News contributed to this report.)