Movie Wizardry Wows in Oz the Great and Powerful 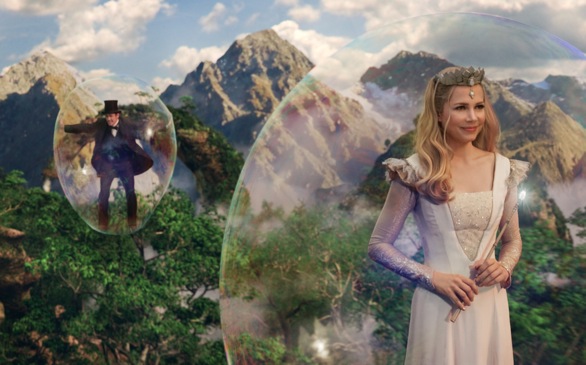 Oscar Diggs didn’t want to be just a good man; he wanted to be a great man. However, life in a traveling circus didn’t allow greatness. Instead, it made him settle for parlor tricks and brief flirtations with women from the countryside. He was a showman, but he wanted to be a miracle maker.

Oz, as his cohorts knew him, gets swept up in a maelstrom over the prairie, lifting his hot-air balloon into a fantastical land very unlike the sepia-toned existence he was used to. Ahead in the distance, a visage in red calls, “Are you the wizard?” He laughs in spite of himself. Greatness was calling.

Oz the Great and Powerful is a precursor to the celebrated 1939 film classic in which a scrappy farm girl named Dorothy ventured over the rainbow. She eventually meets Diggs in his larger-than-life incarnation as the magical “man behind the curtain” – but what of the story behind that man?

This new offering, directed by Sam Raimi (Spider-Man trilogy), peers into a life that launched as a con but came to legendary selflessness. The country that coincidentally bears his name is in disarray since its king was poisoned. But before he died, the king prophesied that a wizard would fall from the sky and liberate the people. Oz the Great and Powerful follows Oz’s journey down the yellow brick road and into maturity.

The cast and crew of this epic Disney production gathered in mid-February at a press junket.Accompanying them was a green-screen replica of Oz’s balloon, which passersby could saddle into, putting themselves alongside a digitized version of the wizard, as played by the chameleon-like thespian James Franco.

Franco (who worked with Raimi in the Spider-Man series) plays Diggs, a loveable scoundrel in search for his next big heist.

“As selfish as he is, and as much of a cad as he is in the beginning, it would never go to the point where he’s unlikeable,” the actor said of his character’s arc. “Because all of his manipulations and conning of people are sort of played for laughs.”

In following Oz’s origins (hinted at but never fully realized in the L. Frank Baum literary works of the early 1900s), we also see the beginnings of the witches that have become cinematic icons. Indie darling Michelle Williams is cast as the mysterious Glinda. Heralded actor Rachel Weisz embodies the electric seductress Evanora. And doe-eyed yet fiery Theodora is played by Mila Kunis of “That ’70s Show” and Black Swan fame.

“I got very nervous about playing such an iconic character…” Kunis admitted. “Here’s a girl, very young, who’s not sure she’s worthy of love… meets James’ character, falls madly in love with him – very quickly, mind you, but nonetheless – and then gets her heart broken.”

Kunis added, “It’s fun to play someone who has no boundaries, who has no rules.”

Producer Joe Roth (2010’s “Alice in Wonderland”) joked that his role in bringing this “Oz” to life was very similar to that of a witch’s: No boundaries, no rules. Roth and crew sought to be reverent to the Baum library and the cinematic versions before this one. He’d grown up watching The Wizard of Oz on TV every holiday season. But unlike that movie, his team wanted to emphasize that as incredible as the Land of Oz was, it was real.

To aid in the believability, Raimi shot Oz the Great and Powerful in 3D. Here again was a venture into new territory for the veteran director, a journey that he enthusiastically described.

“I didn’t know anything about 3D, so I had to go to school to learn with different technicians and different camera systems, go to effects houses…” Raimi recalled. “I had never created a world before. Every single blade of grass, every little blossom was thought out by an individual artist…I had never been a part of something so gigantic.”

Nor had Zach Braff, who voices Oz’s winged-monkey sidekick, Finley. The well-rounded artist took a cue from Andy Serkis (Lord of the Rings’ Gollum) and not only provided an emotive vocal performance, but also stood in physically for the tiny ape. Three specialized cameras captured Braff’s movements, which were converted to CGI.

“When it was possible for me to be physically there interacting with James, we were getting the best stuff,” said Braff. “…We figured out if I was on my butt and hunched over, I was 36 inches tall, which is how tall Finley is. So often, I was there in my little blue-screen onesie.”

Also joining Oz’s adventure is the fragile yet feisty China Girl (voiced by Joey King) and the stubborn Emerald City guard, Knuck (Tony Cox). Familiar Oz denizens such as the flying baboons commanded by the Wicked Witch and the Munchkins make appearances as well.

This is an Oz for the 21st century, with a cutting-edge, all-star cast. But as Raimi said, the spirit of Baum and The Wizard of Oz still resonates in this piece.

“All I wanted to do was make the ultimate Walt Disney picture,” he said. “It was for families; it was uplifting.”

Oz the Great and Powerful lifts off March 8 in theaters.