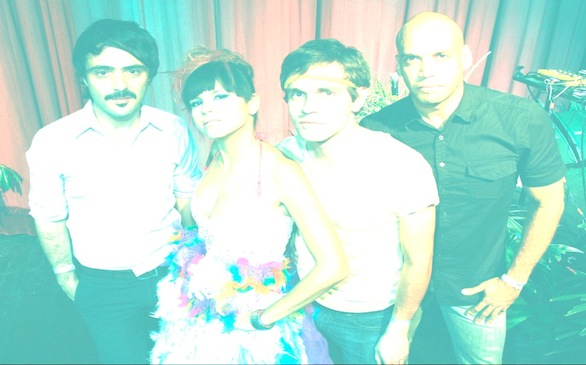 Let’s face it. Our world is evolving and changing everyday, and that’s the case, as well, within the music scene – particularly the city of Los Angeles.

The event is open to all ages and tickets for the show are $15 pre-sale and $18 at the door.

“I love it,” said Li Saumet, who is the lead singer of Bomba Estereo. “These are all bands I like, and we're all friends. I love these types of events because it always feels like something new.”

Morrison, on the other hand, couldn’t hide her excitement for being part of such a special night.

“I'm very excited,” said Morrison. “And I feel the other acts are pretty cool, so I'm very excited. They're all great bands, and all are from totally different genres. I think it's going to be something very cool and interesting because we're all Latin American.”

“It'll be a great night,” said Marisol Hernandez, lead vocalist of La Santa Cecilia. “You'll be hearing all sorts of different styles of music from the heart, and also lots of music to dance to. It's a celebration of life, and what we do. It's about singing, being happy, being sad, and all sorts of emotions. With their busy lives, sometimes people forget to just relax and hang out with friends. We'll be playing a little bit of everything, along with a couple new songs.”

Bomba Estereo, who has played more than 300 shows around the globe, sports a new album titled Elegancia Tropical (Tropical Elegance). Saumet says the group will be performing new tracks at the concert.

Astro will bring their alternative sound with touches of psychedelic rock. La Santa Cecilia, which is a Latin GRAMMY-nominated collective of six musicians, will offer Latin sounds such as cumbia, bossa nova, tango, Afro-Cuban percussion, rock and jazz.

“It's going to be a great night, with music from all over Latin America and all sorts of styles. People are in for a treat,” added Hernandez.

Brooklyn-based DJs Uproot Andy and Geko of Que Bajo?! will add a vibrant tone to the night, while Tecate, Baja California-born Carla Morrison, a two-time Latin GRAMMY winner, is sure to conquer the audience with her pop-rock music.

Morrison manages to remain humble after receiving meaningful recognition within the industry.

“I think the GRAMMYs were something very special,” she said. “I don't make records to win GRAMMYs but to win one or be nominated is a great accomplishment. It's a great manner of recognition. I feel the academy has been making an effort to look in more places for talent. I'm happy that I was nominated and of course I'm happy to have won two; it's an honor and inspires me to create more music.”

Panamérika is the longest running weekly show on RBMA Radio. It's a celebration of the vast and varied cultural landscape in Latin America and the first place to discover the music that matters from the region, each and every Monday, according to a prepared statement by Digital Girl Inc.

For Bomba Estereo, L.A. has signified a great deal. Saumet doesn’t hold back when asked about it.

“It's meant a lot,” said Saumet. “Every time we're in L.A., we always get a warm reception. There's a lot of diversity, and people seem to be very open to new things. The first time we were there it was incredible. People really enjoyed themselves in the concerts. We received very good compliments. We feel people in L.A. have a lot of love for our band, and I'm very excited to perform.”