Lakers Continue to Make Playoff Push With Win Over Hawks 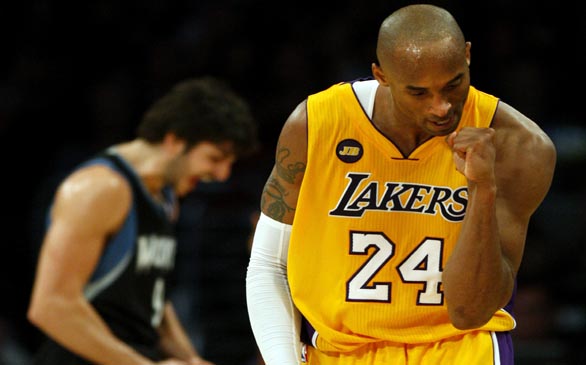 L.A. gave up a 16-point lead down the stretch, but Dwight Howard was not disappointed on the way the Lakers sealed the game.

“Some games are pretty, some games are ugly,” he said. “But at the end of the day, we still win. We just have to continue to trust each other on defense, continue to talk things out. We’re still going to make mistakes, but we have to learn from them and move forward.”

Kobe Bryant continued his solid production, scoring 34 points, grabbing six rebounds, dishing four dimes and having a highlight dunk over Josh Smith in the fourth quarter with 2:19 left on the clock, giving the Lakers a 95-94 lead.

When asked about his dunk, Bryant said, “Vino, man,” indicating that just like wine, he is only getting better with age. "Honestly, I can’t really explain it,” he added with a huge smile on his face.

The Hawks were not giving up easily as Al Horford made an easy and silent dunk with 26 seconds left in the fourth to give them a 98-97 point lead. But count on Bryant to carry his team in the final seconds and deliver like a basketball god. With nine seconds remaining, he drove to the basket, and managed a shot high off the glass to secure a win over the Hawks.

“I wanted to attack. Go right at ‘em. Take the game to ‘em, be aggressive, be physical, and it worked out,” he said, referring to his last six points at the end of regulation.

It appears as if Bryant is done facilitating for others, and a sense of urgency is kicking in.

The Lakers are 5-1 since the All-Star break, yet it’s difficult to say if people can buy what the Lakers are selling so late in the season: a playoff guarantee. But Howard seems convinced that the ups, downs and inconsistencies that have been seen so far this season are finally over.

“…Throughout all the situations, we are sticking together, and we’re playing through it. And I think early in the season, the way we were playing, everyone felt like they could beat us. But I think now people are starting to see how tough we can be when we play together,” he said.

But even with the Lakers making a possible U-turn in their season, it’s hard to believe the Lakers can face a team like the Oklahoma City Thunder, San Antonio Spurs or their hometown rivals, the Los Angeles Clippers, come playoff time.

Coming off the huge signing of Steve Nash and blockbuster trade of Howard in the summer, the expectations were high for this Lakers team to win a championship in their first year together. But chemistry has been a factor in showing that the Lakers are incapable of winning a title this season.

However, with only 22 games left in the regular season, the Lakers seek to keep their momentum and energy going. Howard believes the Lakers have the opportunity of a lifetime to make the greatest comeback in sports history.

But does this win and record of 30-30 feel like a footstep towards that milestone?

“One game at a time. That’s all we can do,” said Howard. “We can’t look behind us; we have to stay in the moment. This game is over with. If we come out tomorrow, [or if] we come out the next day with the same mentality we had tonight, we should have another win.”

While a playoff reach is uncertain for this Lakers team, there is no doubt that in the last six games there seems to be a collective effort on the floor. Howard believes that playing with effort is causing the team to play together.

“Things are coming around for us,” he said. “We’re doing a good job. Some games are dictated in tempo…we just have to continue to play hard, continue to talk to each other [and] and continue to rotate. That’s the biggest thing. We are going to have those games where teams are out running us because we took those quick shots. When we control the tempo, it’s tough for teams to beat us.”

Tuesday’s game against the youthful and agile Thunder in Oklahoma City at 6:30 p.m. will certainly be a defining moment in determining if the Lakers are capable of controlling the tempo of a game.