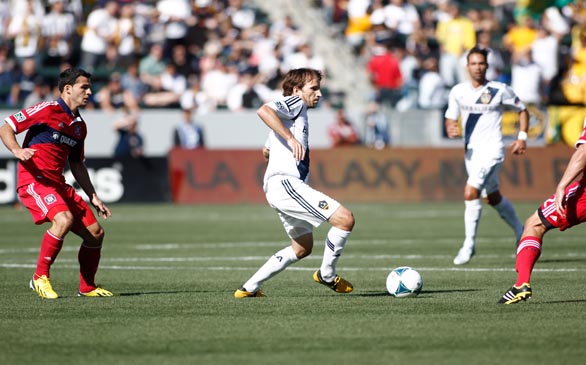 No David Beckham. No Landon Donovan. No problem.

The Los Angeles Galaxy got off to a hot start to the 2013 campaign with a 4-0 victory over the visiting Chicago Fire before 20,124 fans Sunday afternoon at the Home Depot Center in Carson.

Mike Magee’s first career hat trick and second multi-goal game of his career provided much excitement for the crowd, despite the absence of both Backham and Donovan. The game marked the team’s first affair after the departure of Beckham. Donovan, on the other hand, remains on break and will re-join the squad later this month.

For his three-goal display, Magee earned MLS Player of the Week honors by the North American Soccer Reporters on Monday.

During the first 30 minutes of play, both teams were in the stages of gathering a rhythm collectively. It wasn’t until the 38th minute where the match saw a thrill. That’s when Magee executed a left-footed halfway bicycle kick as the ball landed into his space. The shot went into the right corner of the net to give the Galaxy a 1-0 lead.

Defender Todd Dunivant was credited with the assist.

“Todd Dunivant played me a brilliant ball that I took out of the air and volleyed it home,” said Magee.

“What can I say? Three goals. I think he finished well,” he said. “I don’t think his first 30 minutes were as good as I’d like to see, but I don’t want to get on the wrong side of Magee. He could get me fired, I guess, at this point. His second half was real good. He and Robbie [Keane] did a real good job, got a number of chances.”

Magee’s second score arrived in the 68th minute when Keane made a perfect pass to his feet inside the box. Magee then escaped the Fire defense to release a potent left-footed kick into the upper left post of the net. Keane received the assist.

“The second one Robbie did well to slip me, and I remember cutting it, and from my view, it went in the top corner,” said Magee, who was substituted with less than 10 minutes left on the clock. At that point, the audience roared in cheers for Magee.

“…On the third one, Robbie did his normal thing, creating a chance,” said Magee. “The goalie saved it, and it came to me, and I chested it down. My left foot wasn’t missing today.”

Keane and Magee started as forwards, which turned out to be a productive duo. Keane complimented Magee for his production against the Fire.

“You see the quality that he has,” Keane said of Magee. “The three goals he scored were exceptional goals. He’s really important to this team, and he showed that today. It was a good start to the season, exactly what we wanted, so we can kick on from there.”

Keane, the team’s new captain, managed to score a goal of his own in the 80th minute after penetrating the back of the net with a right-footed kick.

“He’s a different class,” he said. “All three of my goals somehow, somewhere started with him. Not that Robbie needed any more goals, but I was happy to see him get one.”

The Galaxy next host Chivas USA on Sunday, March 17 at 2 p.m.

-Italian goalkeeper Carlo Cudicini made his debut with the team and MLS.

-Defender Leonardo was back in action. Two years ago, he suffered a major knee injury.

-A total of three Brazilians were named starters: Leonardo, Juninho and Marcelo Sarvas.