Matthew Plenk Opens Up About College, Family, L.A. and More 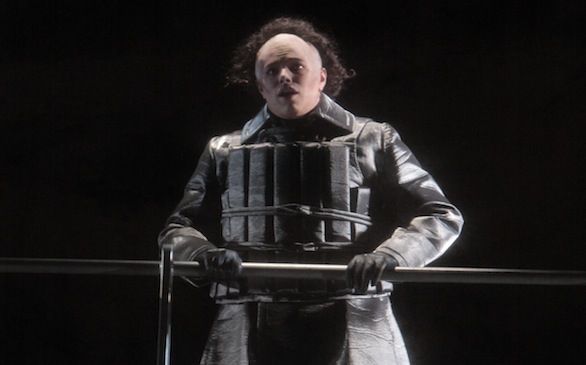 Matthew Plenk as the Steersman in
(Credit: Robert Millard)

Tenor Matthew Plenk has performed in front of numerous crowds in different locations, but that doesn't mean he is not excited about performing in Los Angeles.

Matthew Plenk: I first started singing in the church choir when I was a kid. Then later on, I decided to go to college and get a music education. While I was auditioning for schools, I was encouraged to go into performance, so I was a double major: music education and performance. After being in a conservatory environment for a few weeks, I realized that teaching was not where my passion lay – (operatic) performance was more for me.

MP: It was interesting. I went to the first school; it was part of the University of Hartford. Their vocal department was going through a transition at the time, but I got a great foundation in music and language with my teachers there. Then, I was able to go on to grad school.

CC: In terms of the upcoming show, “The Flying Dutchman,” how are rehearsals and your preparation coming along?

MP: We're in our 10th week of rehearsals, and we're finally on-stage. We have all our set pieces in place to rehearse with as well; it was a huge creation. In terms of preparation, I rate the role home, and the show is ready to go. We also had musical rehearsals the first week. Then, we jumped into the staging. This production has been done in Chicago and San Francisco, so the director gave us a very clear picture of what was expected. So the preparation process was very smooth and very clear, which was nice. We're all well prepared.

CC: Tell us about the character, Steersman, you'll be playing?

MP: He is essentially the first mate on this ship. The captain of the ship is his father, and I am his right-hand man. I give orders to the crew, and take over watch for the captain at times. As far as the story goes, I lead the crew, which is eventually spooked out by the Dutchman's ghost ship in the third act. Actually, the bulk of the story happens in Act II between Deland and the Dutchman.

CC: Why should the L.A. audience come see “The Flying Dutchman”?

MP: It's definitely not your typical showing. It's got a very interesting set visually and architecturally. Also, the production is very powerful, but it's also short – only two and a half hours, which is nice. It's also got a really amazing cast, which I would say it's the strongest point.

CC: You've performed in numerous locations, including Virginia, Georgia, and Massachusetts. Now, you're making your debut in Los Angeles. How do you feel?

MP: I'm very excited. I was here for the LA Phil at the Hollywood Bowl last summer, so I'm a little familiar with the scene. Also, my brother went to school here; he did his masters and Ph.D. at UCLA. LA Opera is a very strong company in the U.S., and it's an exciting cast. It's going to be a good time.

CC: What do you enjoy the most from L.A.?

MP: So far, it's been the weather. My family and I came down from Portland, which was a nice change from New York even though we missed the blizzard. But here, we've been able to walk around downtown and to the park with my daughter.

CC: What do you do with your free time?  What are some of your hobbies?

MP: I play golf whenever I can. I also try to spend as much time as I can with my wife and daughter, who is 15 months old. So taking care of her really is my hobby at the moment.

For more information on "The Flying Dutchman," click here.

Interview
'Spamalot' hits Bowl with star-filled cast and a joke rewritten for a changed society
2,325 views

Interview
A Convo with 'The Nutcracker' Prince: Mikhael Kinley-Safronoff plays one of the leads in Marat Daukayev School of Ballet's annual show.
5,089 views