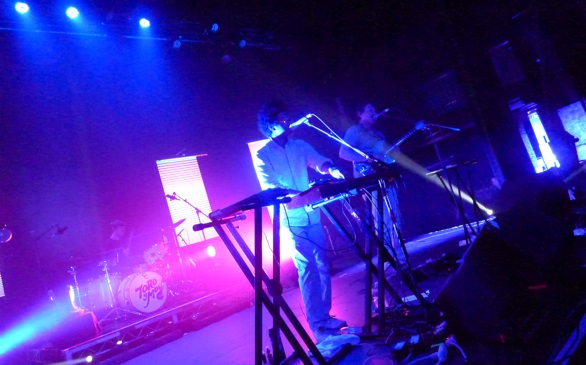 Toro y Moi has been described as a "chillwave."
(Credit: Zach Bourque)

The wunderkind legally known as Chazwick Bradley Bundick, better known by his much smoother stage name Toro y Moi, took to the Fonda Theater for a packed performance on Sunday, March 3.

Those who braved the arena on a school night were in for a catchy, charming performance by the bespectacled 26-year-old, who is fresh off the success of his latest release Anything In Return. Even if the name doesn’t ring a bell, many are sure to be familiar with his music thanks to rampant radio play on KCRW. One listen to the album’s first single “So Many Details” will confirm any doubts you may have about Toro y Moi's talent.

Nearly impossible to bottle up into a sentence, Toro y Moi’s sound has been described as “chillwave,” a coin termed several years ago for Toro y Moi and several others such as Washed Out and Neon Indian. His music is certainly chill with a danceable quality that is especially noticeable in his latest record. While Toro y Moi produces the music himself, he performs with a full band as backup.

With more than several “I-love-you-Chaz” calls reinforcing the adoration that fans (especially females) have for this guy, everyone was simply thrilled as he took to the stage. Opener Dog Bite warmed up the crowd with its unique chilled-out psychedelic rock; it was spectacular.

But this was Toro y Moi’s night. Working in tracks from his previous releases along with plenty from Anything In Return, Toro y Moi and company knocked it out of the park. A good portion of the hipster-heavy audience donned glasses in support of Toro y Moi’s unique style, and many took the opportunity to sing along with their own renditions of “So Many Details” and “Still Sound” among others.

Though it was certainly late for a Sunday, those who made the trek out to the Fonda were in for a treat. Those unfamiliar are urged to check out the extremely cool video for “So Many Details” and do themselves a favor of checking him out on his next runabout in L.A.