Cavalia Returns to L.A. with an All-New Show 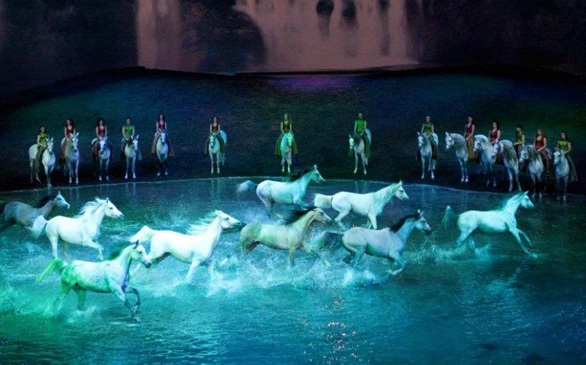 “If Walt Disney were still alive, he might create a show as magical as Cavalia’s new Odysseo,” proclaimed the Miami Herald last year. Can a show be that good? Audiences in Canada, Mexico and across the United States think so. Now Southern Californians can find out for themselves when Cavalia’s Odysseo makes its Los Angeles debut on Feb. 27.

The $30 million spectacular is a voyage with horse and man to the world’s most beautiful locations.  Sixty-seven horses representing 11 breeds along with 44 riders, acrobats and a live band lead the audience to the African savanna and dessert, the Northern Lights, the American Southwest, rolling hills and lush forests.

A high-definition video backdrop equal to three IMAX screens allows the audience to feel a part of the action. At one point the stage begins to flood before the audience’s eyes. Cries of disbelief are heard as 80,000 gallons of water create a lake at the base of a waterfall in less than three minutes. When nine Arabians gallop through the lake, a collective gasp is heard. Ultimately, the entire human and equine cast splash together in a stunning visual and emotional crescendo.

The show focuses on the elemental wonder of what man and beast can do. Indeed, together man and horse conquered the world, built civilizations and ushered in our modern age.  Performed under a football field-sized White Big Top, the world’s largest, Odysseo presents the glamour and technology of any permanent theatre found in Las Vegas, London or New York.

Created by Normand Latourelle, one of the founders of Cirque du Soleil, Odysseo is the realization of nearly a decade of work. Following the instant success of the first Cavalia show in 2003, Latourelle began to dream of how to break through the limitations of a big top tent.

The biggest challenge was to open up the performance area to showcase more horses and acrobatic scenes. This involved removing supporting masts from the stage, a common staging issue in tent shows.  A specially designed big top was created in Europe where the weight of the structure shifted from masts to two arches above the tent. The engineering facilitated the installation of an 80-ton technical grid that supports a real-life carousel, lighting and set pieces. The grid is bigger than most found in the world’s largest theatres. Now the 15,000-square-foot stage, the size of a hockey rink, was open enough to present more than 30 cantering horses at a time.

“Odysseo goes beyond the relationship of horse and man to show how the two explored the world together,” said Latourelle. “To tell that story, we found technology and the ultimate stage craftsmanship to go beyond anything seen on a touring show.”

Beginning in a misty, enchanted forest where a herd of horses graze and frolic under a sky of rolling clouds and a setting sun, the horses, artists and audience embark on a soulful journey together. Eye-popping acrobatic displays integrated with dazzling equestrian numbers featuring jumping, dressage and stunt riding comprise the two-and-a half-hour performance.

In “Fête de Village (Village Party),” horses, acrobats and urban stilters take part in a friendly and joyous obstacle-jumping competition. Horses power angelic aerialists in “Vol (Flight),” a four-person silks act that takes the viewer into the skies. An acrobatic team from Guinea, West Africa introduces their native culture through music and song while also flipping so fast that the eye often only sees a blur gliding through the air.

For an unprecedented finale, the stage floods before the audience’s eyes. In less than three minutes, 80,000 gallons of water create a lake at the base of a waterfall. “Les Voyageurs (The Travelers)” explores the beauty of classical dressage, the highest form of classical dressage, for the ultimate display of the connection between man and horse. Audiences will be shocked when they see a herd of horses gallop through the lake. Ultimately, the entire human and equine cast splash to a stunning visual and emotional crescendo.

All the horses are male – 20 are stallions and 47 are geldings. They hail from seven countries, including Spain, Portugal, France, the Netherlands, Germany, the United States and Canada. Following every performance, Rendez-Vous ticket holders can tour the stable to meet the horses.

At the heart and soul of every performance is the age-old bond between human and horse. The company fosters an environment where patience, trust and deep-seated respect for the four-legged stars come first. Cavalia’s training methods are designed to make sure that the horses enjoy training and performing on stage. Trainers pay close attention to the horses in order to ensure that every request is adapted and respectful of what the horses are ready to offer.

They receive around-the-clock care from a team of groomers, riders, a blacksmith and veterinary technician. The horses are bathed at least once a day, and the stables are cleaned throughout the day. Their diet consists of hay, grain, carrots, apples and vitamin supplements.  The stable measures 1,300 square feet and contains roomy stalls, showers, a saddlery and a blacksmith’s area. Thick rubber mats made from recycled tires cover the entire floor. Adjacent to the stable tent there is an inside arena for the horses and the trainers to warm-up and train. These fully air conditioned and heated tents are connected together by tunnels to the stage area.

BEHIND THE SCENES
The 110-foot tall White Big Top never fails to impress people. In fact, sometimes it even slows traffic as people drive by. After all, it’s not every day that a new 10-story edifice is erected in less than a month. The look of Burbank’s skyline has been evolving since January when work began at Cavalia’s Odysseo site near downtown Burbank.

Workers initially began by flattening the ground and adding dirt and sand to support the building of the performance, stable, VIP and kitchen tents. One by one, dozens of trucks filled with equipment arrived. The show carries everything with them from costumes, lighting and props to bleachers, bathrooms and heating/cooling system. An 80-member crew, including several local staffers, built the site. To give you an idea of how big a show this is, a Rolling Stones tour uses around 60 trucks to move their equipment; Cavalia uses more than 80.

The Cavalia’s Odysseo White Big Top is the first tent to combine a system of masts and arches. This allows the stage, seating, lobby and backstage to be under one tent. More than twice the size as the structure created for Cavalia’s original production, the White Big Top is nearly the size of a NFL football field.

A total of five tents comprise the Cavalia’s Odysseo village.  A Rendez-Vous tent hosts VIP ticket holders for dinner, an open bar and photo opportunities with the artists. This package includes a private tour of the stables and the best seats in the house.

The horses live in a climate-controlled stable tent complete with showers, a tack shop and a blacksmith department. Between the stables and White Big Top, the Warm-Up tent is where the riders rehearse with the horses before and after the show. This area also includes wardrobe, makeup and dressing areas for the two-legged artists. A staff kitchen tent prepares more than 600 meals daily. Connections to local water, electrical and sewer services are installed in each show location. Fully functioning, portable bathrooms are rented locally.

FACTS ABOUT THE WHITE BIG TOP
•    The White Big Top is 272 feet long by 174 feet wide, approximately the size of a NFL football field, and covers more than 47,000 square feet.
•    Under the White Big Top are the stage, a lobby, a gift shop and food stands.
•    Seating capacity for 2,000 people.
•    The stage is made of 10,000 tons of stones, dirt and sand.
•    An underground water system is built to flood 80,000 gallons of water onto the stage for the finale. After the show, it takes 15 minutes to drain the water.
•    The high-definition backdrop is the size of three IMAX screens.
•    The technical grid supports 80 tons, including a full size merry-go-round.

ASSEMBLY OF THE WHITE BIG TOP
•    There are two arches that support the White Big Top. Each arch consists of eight sections that are 8 feet wide by 30 feet long. Once assembled, each arch is 89 feet high by 203 feet long.
•    Sixteen canvas pieces are laced together into one piece that measures 18,000 square feet. Thirty motors are needed to raise it onto the White Big Top.
•    To support the weight of the canvas and technical equipment, four 110-foot tall masts are erected.
•    The canvas is held in place by three 1,310-foot long stakes holding down the 250 anchor plates.
•    The length of all the steel cable used to attach the structure to the ground is equal to 3.6 miles.
•    The side walls of the White Big Top are assembled with 166 poles.

FUN FACTS
•    Odysseo features 67 horses of 11 different breeds, including the Appaloosa, Arabian, Ardennais, Canadian, Holsteiner, Lusitano, Oldenburg, Paint Horse, Quarter Horse, Spanish Purebred (P.R.E.) and Warmblood.
•    They hail from seven countries: Spain, Portugal, France, the Netherlands, Germany, the United States and Canada.
•    The average age of the horses is 10 with the youngest at 5 and the oldest at 18.
•    There are 44 artists – acrobats, aerialists, riders, dancers and musicians in the show.
•    They represent 13 countries, including the United States, Canada, Belgium, Brazil, France, Germany, Guinea (Africa), Japan, New Zealand, Poland, Russia, Spain and Ukraine.
•    Anna Laura Edmiston, the show’s vocalist, is a Grammy-nominated artist. As vocalist and guitarist for the band Feufollet, the group was nominated in 2011 in the Best Cajun or Zydeco category.
•    There are 350 costumes and 100 pairs of shoes and boots in the show. Artists may have up to seven different costumes.
•    An artist may have no more than 90 seconds to do a quick costume change between numbers.
•    A team of 20 artisans, including four cutters, 12 dressmakers, one property master, one designer and one shoemaker worked in the Cavalia studios to create the costumes.
•    Materials used in the costumes include linen, silk, cotton, leather and some imitation fur. The use of natural fibers adds sheen to the clothes and lets them fall in a way that synthetic fibers simply cannot match.
•    The costumes are adapted to the artists’ needs, especially those of the acrobats and riders, to facilitate their onstage movement while not compromising their appearance.
•    The on-tour costume department consists of one wardrobe person and three dressers who launder, mend and care for the costumes. At times during the show, they juggle 15 simultaneous wardrobe changes. They have two sewing machines, one shoe-repair machine and one overlock machine.

EMPLOYEES AND LOS ANGELES
•    There are 120 full-time employees working as artists, in the stables or behind the scenes. They are from Canada, the United States, Europe (France, Spain, England and Poland), Africa (Guinea) and South America (Brazil).
•    Cavalia employs 200 locally hired people to assist in the set up and tear down of the show, work in the box office, kitchen, concessions, parking and front of house.
•    Cavalia stimulates the local economy through the purchase of machinery, stone, dirt, sand, diesel, office furniture, food for the audience, employees and horses. Employee housing and construction equipment are rented.

Cavalia’s Odysseo will appear in Burbank through March. Show times and ticket information are available at cavalia.net.