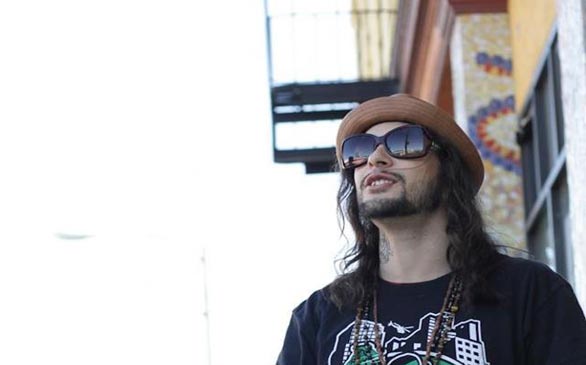 Hector Guerra is not only a singer and rapper, but also a songwriter. This Spanish-Bolivian MC and producer is presenting his new album, Amor. His single “What’s Up?” has reached success throughout Latin America.

Campus Circle conducted an interview with Guerra. Here’s what he had to say:

Campus Circle: Can you talk about the moment when you discovered your passion for music?

Hector Guerra: Ever since I was 7-8 years old, I've always had an affinity to music. While my friends were out playing ball, I was forming bands and playing music. When my father realized I was serious about it, he began paying for me to get music lessons. So little by little, I obtained musical training to the present day.

CC: Can you talk about your musical influences?

HG: Well they've changed over time. For the longest time, it seemed like rockers would turn to rockers for inspiration, and rappers would be with rappers. Electronica artists would draw from other electronica artists. Eventually, I reached a point in my career where I realized that didn't have to be the case. If I want to, I can learn from and collaborate with a rocker, a rapper, a salsero, etc. I began listening to music that 10 years ago I wouldn't listen to at all. Currently, salsa music from the 1970s has been inspiring me as well as cumbia. I've also gotten into soul music lately, and electronica and reggae - new styles for me.

CC: Talk to us about your album, Amor, the first of a double. What can you tell us about the concept of this album?

HG: It talks about how everyone has it in them to give pure love and luminous love. But to achieve that, one must accept this fact, and only then can you give out this kind of love. It also talks about how no matter what kind of hell we're living in, this can still happen. The rhythms are more organic, more lively and happier.

CC: What can you tell us about the lyrics for the song, “La Historia de un Amor”?

HG: I believe it's a story that's happened to everyone, from the most reserved person to the most outgoing. I feel we've all loved a woman to the point where that love begins to suffocate us. It's an intense fight that brings them almost to break up. But 30 minutes later, they are making love passionately. Then the sex stops, and the fighting resumes...it's very reflective of many contemporary relationships nowadays.

CC: What can you tell us about the chemistry with Bang Data in the song, “Tierra”?

HG: It was something very natural. The members of the band come from various ethnic backgrounds, and we wanted to somehow reflect that. One of the members is Peruvian so we wanted to include Andean elements as well as elements from Mexico, Bolivia, San Francisco, etc. It's a beautiful song.

CC: What do you do with your free time? Any hobbies?

HG: Well, music takes up about 90 percent of my life. When I have any free time, I like to smoke weed and watch movies and also spending as much time as I can with my family. I like to relax.

CC: If you could change anything about the world to make it a better place, what would it be?

HG: Well, I think the world is wonderful. If I HAD to change something about our society, I would change our economic and political systems and educational policies. I would implement more effective policies to improve education and the economic status of everyone.