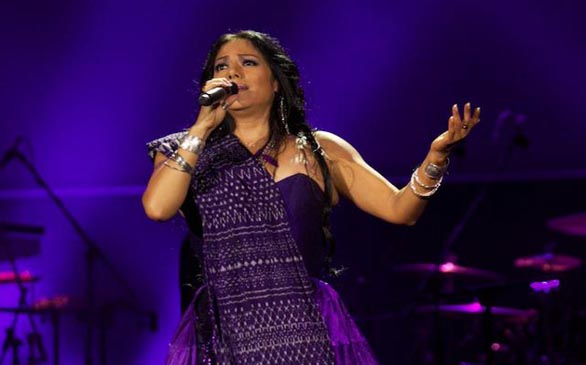 Over the years, Lila Downs has been an inspirational singer and songwriter. This Mexican-American artist manages to write a lot about women losing their place in society. Often, she’s the voice of many when performing her own compositions.

Fresh off a GRAMMY win for her Sony debut album, Pecados y Milagros, the singing star begins the second leg of her tour with a tribute concert to her late father in Minneapolis (March 10) and concerts in Texas, Arizona, Illinois, New York, Canada and more. For a complete look at tour dates, visit www.liladowns.com/us/events.

Lila Downs: According to my mother, I started singing when I was very young. But I think as I got older and began going to parties like quinceañeras and weddings, I became more and more aware of the power of being a performer. I started vocal training when I was around 16. And also, my mother was very involved in my development because she would always comment on my singing. She would say things like, 'You're singing very beautifully, but I think you can give it more emotion.’ Things like that really helped me discover the power of what it is I do.

CC: Is that how your musical influences began to develop?

LD: Definitely. I had various influences as a child – listening to opera. My father listened to Bob Dylan and John Coltrane. We would have company a lot, him being an artist and all, and I learned from different kinds of music. Later on, I developed a passion for 1960s and '70s music, that being the time when my parents were developing their careers as professors, and that had a lot to do with translation of culture.

CC: You're a GRAMMY winner. How does this all feel?  Is it a victory for you? How would you classify it?

LD: It's very exciting in a way because I consider myself a folk artist. And in the folk scene, you don't rely on the same kind of promotion as say, a pop artist. I've never been a pop artist, but I would imagine this to be the case. But I think it's like a tap on the back for someone who's mainly been independent. Recently, we've been working with Sony here in Mexico, but I'm proud to say we've never really had anyone telling us what to do, what to perform, etc. because that happens a lot here in Latin America. I'm proud we've stuck to tradition, and we've found different ways to perform this for people and make it fun.

CC: What can you tell us about the lyrics for the song “Zapata Se Queda”?

LD: I wake up at 3 a.m. because I can't sleep, and there's a saint that's a ghost that I hear at that time, and the voice says to me, 'Watch it, girl. Don't go so fast.' And I decide to wake up and move my body slowly little by little. There's a lyric, 'the shade of the Seba tree.' And the Seba tree is very symbolic in rituals from Latin America because it represents the origin of native peoples. Under this Seba tree, there's a miracle street, and there's this hero who's been shot, and it's a black rooster, which is also symbolic in Latin America and symbolizes transmutations. There's this belief that people like politicians transform into black animals, like jaguars and black roosters. There's another lyric, 'I think I can hear you, Zapata, with your interminable light,' as in him telling us where to go and what to do. I've been thinking about him constantly. In Mexico, we hold a pistol in one hand while thinking progressively what is the future for people like us.

CC: Where have you received your inspiration for writing songs over the years?

LD: It depends...a lot of the time, it's been about women who have lost their position in society or have been marginalized by situations that we confront, like discrimination. I lived through that when I was a teenager. I want to find people who make me stronger, and I think that's how I began writing about characters who lose everything, and then they take charge of their life and change direction. I'm constantly finding stories about people like that. I would love to compose a series of songs on migrants in the U.S., who are just facing these impossible situations with their families, who've been deported or still don't have their papers. They are the greatest heroes in life because they don't want any attention. They just want to do their thing, and I find that fascinating. So migrants have also been a source of inspiration.

CC: What would you tell the youth out there who might want to follow in your footsteps in this industry?

LD: It's complex for me because in my case, it's got a lot to do with personal identity. For me, I've had to really be honest about who I am – that was my first step. As Latin Americans, we are surrounded by messages that tell us that we're second-class citizens. And that was my first main concern, to feel complete as an individual and a human being. Also, I would say, be persistent. Write every day; sing every day. Also, get out there and perform as much as you can in front of an audience. For me, it was about being on the streets and really understanding what it means to be a performer. That was kind of like my school. Just get out there, and do it.

LD: We'll be touring in the U.S. We'll be in different parts of Texas for the first time. We'll also be in Arizona, and through May we'll be touring all sorts of different places. We'll be performing Pecados y Milagros as well as some of our new material. There's also a movie I was in called Mariachi Gringo, which is about a gringo who gives up his life in the Midwest to go to Guadalajara and become a mariachi, so I'll be composing material for the soundtrack as well.

CC: What has the city of Los Angeles meant for you artistically throughout your career?

LD: It's been an important place where I've been able to redefine who I am. I ran into wonderful people in L.A. and discovered how similar I am to the Chicano community. That was new for me when I moved there because I grew up in Minnesota...at least back then, there weren't many Mexican-Americans there. It's a wonderful place to come back to; it's like coming home.

CC: What are some of the hobbies you do in your spare time?

LD: I like to visit painters. I visit with many visual artists here in Oaxaca. A lot of them are involved in social workshops of different kinds that help different indigenous people. I love to visit rural communities and learn more about bilingual education, and by that I mean native tongues and Spanish. I love to support these programs. I'm also very inspired by Native American poetry and participate whenever I can with groups either here or in the U.S.

CC: Is there anything else you would like to add?

LD: I would just like to thank your wonderful audience who believe in the music we do. It hasn't been easy the whole way, and so I'm very grateful to people who believe in folk music and become motivated by it.

For more information on Lila Downs, click here.
Article posted on 3/5/2013
This article has been viewed 4487 times.