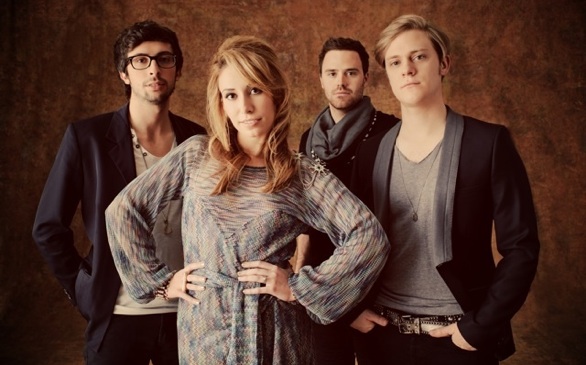 They met when they were 13 years old, made music and fell in love.

Kira Leyden and Jeff Andrea are part of a husband-and-wife songwriting team that formed a band in 2006. The Ohio-based band, comprised of Leyden (piano/vocals), Andrea (guitar), Frank Freeman (bass), Nicholas Sainato (drums), was first industrial rock, then it became progressive rock and then indie. Now, the band is simply the Strange Familiar.

While in her Ohio home, Leyden spoke to Campus Circle about finding identity, the bond between her and Andrea's marriage and music, the band's new fame thanks to “The Vampire Diaries” and “Pretty Little Liars” and how the group name ties it all together.

“It was a phrase I heard in my cultural anthropology class,” said Leyden. “My teacher said that in order to study other cultures you have to render yourself to the strange familiar and the familiar strange. Take a step back, and look at your own culture with a different set of eyes. Also, at the time we were ending our previous band, and this new project was strange and familiar at the same time.”

The new album, Casting Shadows (Krian Music Group), is layered with smoky and haunting melodies powered by hopeful positivity. Pop and jubilant choruses and an incandescent energy accompany Leyden’s soulful voice. Conceptually, this album exposes the band members’ internal search for happiness and the struggle for one to discover one’s true identity.

“I don’t know if you can ever really know who you are, but you know who you are at particular moments in time,” said the singer. “Sometimes, you end up chasing all these things that don’t fulfill you. For example, ‘Alibi’ is us [the band] not faking it, not trying to fit in anyone else's box.”

Being married and in a band can be a blessing or a complete disaster (as we’ve learned though other rock acts such as Meg and Jack White from the White Stripes or John McVie and Christine Perfect from Fleetwood Mac). For Leyden and Andrea, who have known each other since childhood, it’s just normal.

“I think we’re just used to it,” said Leyden. “We started our first band together when we were 13. Over the years, we’ve changed and evolved together musically and personally. Granted, we get on each other’s cases a little bit, but this works well for us.”

She added, “He challenges me in a lot of ways, which is great because sometimes I’m only looking at something through one angle. We constantly bounce ideas off each other, but he’s more into the producing so he creates the soundscape and lets me do my thing; we go hand in hand.”

The Strange Familiar funded half of Casting Shadow through Kickstarter. From there, Krian Music Group heard the material and offered to sign them. The difficult part was finishing the album before the holidays and in the shortest possible time.

Perhaps it was their complete unity or their ability to anticipate each other’s next move, but the band was able to jump on a plane to Los Angeles and finished the record in a week’s time.

“We had to do it really quick during the holidays,” said Leyden. “We had to fly to L.A., get in the studio and finish within a week. I got sick and lost my voice that same week, but we had pre-recorded vocals that saved us. Luckily, somehow it all came together.”

The outfit’s music has been featured in various popular television series. First, it was “The Secret Life of An American Teenager,” then “The Vampire Diaries” and now “Pretty Little Liars.” That’s not a surprise since their sound is incredibly cinematic. Thanks to this success, their lives have been changing drastically.

“A lot has changed; we have so many more fans because of it,” said Leyden. “The first time our music was played on 'The Secret Life of the American Teenager,' we saw a wave of people looking for us and finding us via several platforms. There’s nothing quite like it – that blew my mind.”

While their music sounds like a cinematic cocktail of pop and new wave embellished by nostalgic yet sultry vocals, the message behind it is positivity.

“We want to put out good things into the world, something positive for people to hear; there’s already so much negative stuff out there. We want to do music that will affect people in a positive way,” said Leyden.