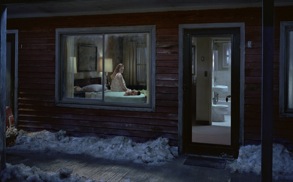 It’s hard to imagine that the same of amount work put into a small film can be put into a single photograph. Usually, a photograph just requires a couple clicks of the camera, and you’re done. However, for photographer Gregory Crewdson, it requires so much more.

In the documentary Gregory Crewdson: Brief Encounters, we are given the privilege of seeing exactly what kind of effort, preparation and imagination is needed to create one of Crewdson’ captivating, cinema-like photos. The film takes us to his sets, which are sometimes soundstages or the streets and towns of Western Massachusetts. These sets require a crew of about 60 people, large equipment, “actors/models” and Crewdson’s extreme micro managing and attention to detail.

Filmed over a decade, this documentary specifically focuses on Crewdson’s “Beneath the Roses,” a project where he uses light, color and character to conjure breath-taking images. Every photograph is of a moment between moments – there is no specific backstory to any of them, yet a viewer can look at a photo and create his or her own narrative effortlessly.

For example, one of his most powerful images takes place at a soundstage that is made up to look like a kitchen. The kitchen is in disarray, with dirty dishes in the sink, a messy table in the middle, worn-out cupboards and cabinets that are left ajar and a cold cup of coffee left out on the counter. There are footprints leading to the back kitchen door, which is left wide open. Through the door, we see a man outside a shed with a tired, drawn face, looking down into a hatch in the ground – what is he looking at? What has this man been through? These are the kinds of questions you find yourself repeatedly asking as you gaze upon Crewdson’s numerous photographs.

Even though there is no plot or storyline in his photos, it does seem that Crewdson has a common theme running through all of them: quiet desperation. The documentary touches on how each of his photos seem to be commenting on the failure of capitalism, since many of his photos take place in a once-thriving town that is now filled with people who seem sad, forlorn.

Director/producer Ben Shapiro does a great job taking you through Crewdson’s process of coming up with an image idea, scouting for a suitable location, finding the right people to “play” each part and developing the photographs. Shapiro takes us into Crewdson’s childhood, and we learn about his psychologist father’s influence. We learn how Crewdson became interested in photography (which initially stemmed from a crush he had on a girl) and how his photography has transformed into something much more than still pictures. Overall, the documentary does a beautiful job of supplying the viewer with information as well as making the viewer get lost in each of Crewdson’s photographs.

Whether or not you are an art enthusiast, you will appreciate Gregory Crewdson: Brief Encounters for its ability to introduce you to a man that is an artistic genius, a visionary who makes you in awe of his work. You will perhaps never look at a still photograph the same way again.

Gregory Crewdson: Brief Encounters opens in L.A. on March 8 at Laemmle Music Hall in Beverly Hills. It will play for ONE WEEK ONLY.