Allen Covert: There's Fun To Be Had Being a Grandma's Boy 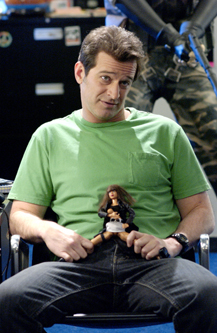 Take one dollop of nakedness, a good measure of crude language; add a pinch of illegal substances and ten parts twisted humor. Mix in three old grannies and a group of desperate young guys. What do you get? One over-the-top, frat party or the upcoming release from Adam Sandler’s Happy Madison film company, entitled Grandma’s Boy.

And like most stories put on the big screen, Grandma’s Boy was based on real life experiences. "About six years ago my father had bypass surgery and he needed someone to help him," explains Allen Covert, co-writer, producer and lead actor. "My grandmother, who at the time was about 87, decided that she needed to be there to help as well. So it ended up being my grandma, my Dad and I in this two bedroom condo for a month.

"I was just laughing at the idea of a guy living with his grandmother and trying to hide his life from her."

Such is the case with Alex – Covert’s character – a 35-year-old video game tester who ends up down on his luck and without a place to live, that is, until Granny (Doris Roberts) offers up an extra room at her house. Toss in Grandma’s roommates, the 80-something, alcoholic-slash-sexaholic Grace (Shirley Jones), and the pill-popping, off-her-octogenarian-rocker Bea (Shirley Knight) and, most definitely, comedy ensues.

"The minute we knew [the story] would be about young people and older ladies, we thought, ‘One of the old ladies has to be dirty and have sex with one of the young guys,’" says Covert.

Enter Shirley Jones, most known for her role as the morally wholesome matriarch in the ’70s sitcom "The Partridge Family." She remarks, "It’s a fabulous part. I’m certainly not Mrs. Partridge in this movie."

The "party scene" – a pivotal scene in the movie where the characters really let loose – was "one of the most expensive shoots we did," admits Covert, where anything and everything goes, including bikini tops and shorts. When Grandma accidentally mistakes Alex’s weed for oolong tea and makes herself a soothing cup of chronic – lo and behold – sparks fly and the scene begins..

"I come home with the guys from work and grandmother is rolling around on the floor, watching Spanish television, laughing because she can’t understand what anyone is saying," explains Covert. "Then I call my friend Dante (Peter Dante) to ask if he has anymore weed, and he shows up with the entire staff and clientele of the local strip club."

Throw in a monkey, an African tribesman, and the unexpected granny hook-up, and you’ve easily earned the movie’s R rating.

Moreover, it seems that art once again imitates life for Grandma’s Boy’s co-writer. Covert admits, as a young teen, he was also once smitten with an elderly woman.

"She was 36 and I was 17, I think," he says looking back wistfully, describing the age difference between him and one hot, English woman he had a fling with while on a family vacation. "Would you like to come back and get some tea?" was the question that clinched the deal. "I kind of thought in my head, ‘I think tea means something else.’"

"But it wasn’t like I was being taken advantage of, trust me on that one," he says with a playful wink.

Yet Grandma’s Boy does take advantage of Sandler’s funny friends, which include "Saturday Night Live" alums Kevin Nealon, who plays top video exec Mr. Cheezle, as well as David Spade and Rob Schneider, who make cameo appearances. At Happy Madison – which produced movies such as The Hot Chick starring Schneider and Joe Dirt starring Spade – Sandler likes to keep it all in the "family."

And for Sandler, family goes way back. "We met in college, Adam and I," explains Covert. "Tim Herlihy, who writes the majority of [Sandler’s] movies; Jack Giarraputo, who produces; and Frank Corachi, who directed The Wedding Singer and The Waterboy – we all went to NYU together."

Sandler also tested out a few newcomers such as Nick Swardson, a young stand-up comedian who plays Alex’s friend Jeff, who also co-produced and co-wrote the script. First time director Nicholaus Goossen, 26, started as an intern with Happy Madison shortly after graduating from high school

Nealon shares his thoughts on the making of Grandma’s Boy. "It’s like Sandler University, you know, it’s a film school. A lot of guys start out as assistants, doing PA jobs, then they kind of graduate up, learning about filmmaking along the way.

"That’s Nick Goossen’s story. But you know, there are child labor laws for directors too. We had to stop shooting at six so he could go to school for an hour, and then come back and shoot more. I think he was studying American presidents if I’m not mistaken."

Although Sandler is not on-screen for Grandma’s Boy, he was active behind-the-scenes; most notably in the joke department.

"There are a million jokes in the movie that are Sandler’s," says Covert with a smile. "It also helps to say that Adam Sandler thinks it’s funny," who often gave his comedic stamp of approval. "The whole time while making the movie I was thinking, ‘If I can make Sandler laugh, I know I’m doing good.’ He’s a tough critic."

For Alex’s love interest, Linda Cardellini (Scooby-Doo, "ER") was enlisted to play Samantha, the video game exec who is smart, sexy, and more importantly, also enjoys a good battle with a joystick. As luck would have it, Cardellini’s first day of filming began a make-out scene with Covert.

"We strangely had to keep doing it take after take. I’m not sure what that was about," ponders Cardellini. Yet Covert can explain the reasoning behind the extra long mack session: "Look, in Big Daddy I had to make-out with Peter Dante," who in this movie, plays the part of Dante. "It was my first make-out [scene] with a woman."

But was kissing Cardellini as memorable as kissing the older woman from his youthful past? Covert makes no comparisons, yet quickly defends his teenage actions. "She was a nice older lady and she was attractive," but then adds, "You know what the scary part is? She’d be like 60 now!"