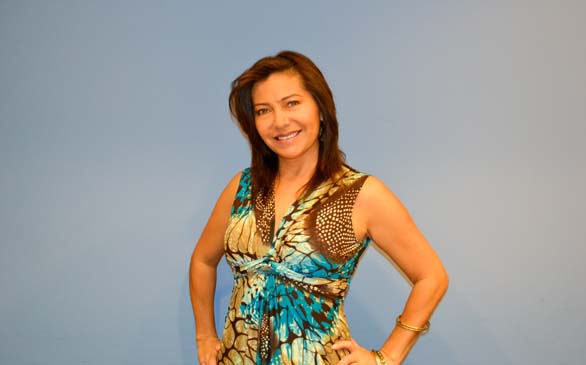 Mara Escalante is an actress and comedienne.

Both of her parents were actors, so ever since she was little she always heard about acting, movies, television and theatre. With no doubt whatsoever, the entertainment world has been a part of her life since birth.

“It’s been a big part of my life ever since I can remember,” she said. “I got my education in dramatic literature and theatre at U.N.A.M. Then, eventually I found comedy and I realized I very much enjoy making people laugh.”

Born in Mexico, Escalante has attained significant contribution for being multi-talented: being an actress, serving as a comedienne, and performing as a singer.

Acting and comedy are most essential to her, however.

“I combined the two, and now I can make sure people have a great time when I’m entertaining them,” she said.

One could make the argument that she’s best known as the star of the Televisa show María de Todos los Ángeles, where she plays a character under the same name.

But she’s also bringing her acclaimed persona of Doña Lucha, whom is an extremely hilarious one, in “Mara Escalante es María de todos Los Angeles y Doña Lucha” – a comedy for anyone in the family.

So why should people attend her show?

“People will really enjoy themselves,” she said. “It’s a family atmosphere, very elegant.  People won't see anything obscene and won't be uncomfortable. This is dedicated to all Mexicans, to everyone with Mexican blood. It celebrates our culture and it's a spectacle from the heart for all my fans.”

Escalante went on to mention that everything she does in her profession, she does it for the adoring public.

“For me, I have a need for people to feel good and be at peace,” she added. “I feel that it is my purpose in life to be an instrument for peace – that through my art, I can bring peace and harmony to others. That's what motivates me. I want to be a source of happiness and well-being to others, especially in these times when that's so necessary.”