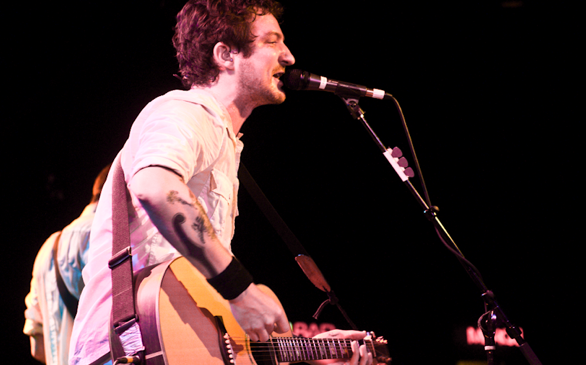 Last Wednesday night at the Roxy, diehard fans packed the room. There were some people who said that they had seen Frank Turner play three or four times in the past and some said they were new to his music. Some of L.A.’s favorite radio DJs also came out to the show and were excited about the buzz going around town.

The audience was made up of the usual Hollywood types (dressed up and out on the town) and some enthusiastic middle-aged concertgoers. Teens and 20-somethings filled the venue to the brim and sang along to more than half of the songs.

Angelinos are not known for dancing at concerts. Despite this fact, Turner challenged the crowd to beat Boston, where apparently the residents have been voted the best dancers in the country. So, the audience jumped into a semi-mosh pit. Some people around the edges decided that more of a solo dance was more their speed. When later asked about what he thought of L.A.’s dancing abilities, Turner told the truth.

Making his way around the country and world, he and his band should be able to choose for themselves who the best dancers truly are. Texas might put up a good fight when he performs at South By Southwest in Austin this week.

“I’ve been to SXSW many times, but this time they will be working me harder than ever before,” said Turner. “I’ve got, like, four shows a day for about a week...”

“I was excited about it, maybe a little nervous, but the end result was great!” he said. “Rich is amazing…he misses no detail. He got me and the guys in my band to get more blood, sweat and tears out of ourselves. It was more than we’d ever done before.”

In keeping with the blood, sweat and tears, many of Turner’s songs are incredibly emotional and heartbreaking lyrically. They have a beautiful juxtaposition with upbeat and bright music with dark, somber vocals.

“It’s been a good experience for the most part,” said Turner. “I write professionally, and I write autobiographically. It is an occupational hazard. It becomes a mix of honesty and catharsis…there are moments where it can be tough to sing them, but it’s my job.”

Prior to this tour, Turner played some once-in-a-lifetime shows, including headlining the U.K.’s Wembley Arena. He also played at the opening ceremony for the 2012 Summer Olympics. Of course, the world was watching the very unique set.

“It was a weird show,” said Turner. “I was playing on a hill to people pretending to play cricket and things like that. Danny Boyle was directing it, and he was a fan and asked me to be involved, and I said ‘yes.’”

Turner and his band are continuing their tour for quite some time, and he promised to come back to southern California for more shows.