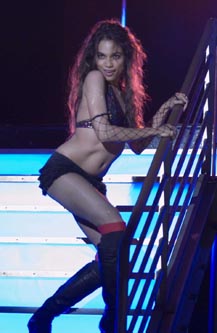 "Rent" has always been about beating the odds.

The edgy rock opera about love among East Villagers and AIDS sufferers of the recent past famously went on after its creator, Jonathan Larson, died of an aortic aneurysm on the night of its first dress rehearsal in 1996.

If that was an eerie omen for the musical’s live-for-the-moment message, it went on to win both a Pulitzer Prize and a Tony Award that year.

The movie version has leaped more hurdles. After years in development hell, it has survived major changes in format. And it stars almost all of the show’s original cast – a feat that wasn’t attempted by the Oscar-winning movie of "Chicago" or the upcoming film of "The Producers."

Despite all that, Rent remains an underdog.

"No one ever thought it was a commercial project," says director Chris Columbus, whose resume includes such un-"Rent"-like blockbusters as Home Alone and the first two Harry Potter films.

Still, Columbus was haunted enough by the show’s heartfelt music that he fought to get it made. "Some people weren’t interested in spending the money it would take," he says. "Others were afraid, or said things like, ‘Is AIDS still relevant?’

"But I remember first seeing the play nine years ago, and I went back again the next week. I just couldn’t get the songs out of my head."

That has been "Rent’s" recurring tune since it opened at a small playhouse in the East Village in 1996. Using Puccini’s opera "La Boheme" as a template, "Rent" tells of two broke artists – filmmaker Mark and musician Roger – and the roundelay of friends who live with them over the course of a year. They include the exotic dancer Mimi, Roger’s lover; the activist artist Maureen, Mark’s lesbian ex-girlfriend, and the cross-dressing Angel, who has HIV.

Strong reviews and word-of-mouth raves quickly got "Rent" to Broadway. But that didn’t guarantee a movie version, despite Miramax purchasing the rights almost immediately.

The initial delay was due to Miramax’s decision to allow touring companies to have six years on the road before a film was made. In 2001, Spike Lee was interested in directing, but then he stepped away. When Miramax put the rights up for grabs, pop singers like Justin Timberlake and Marc Anthony were sought or screen-tested by studios that eventually opted out.

Daphne Rubin-Vega, who played Mimi, was pregnant, so Rosario Dawson (Sin City) was hired to replace her. Fredi Walker, who played Maureen’s girlfriend Joanne, reportedly removed herself from the cast, saying she was too old (at 42, she’s the most senior of the original lineup). Newcomer Tracie Thoms stepped in.

And while the film has lost none of the grit that it had on stage, it has been fleshed out for movie audiences.

"Theatrical musicals need to be altered as they move from stage to screen, because the art forms are so different," says John Kenneth Muir, author of Singing a New Tune: The Rebirth of the Modern Film Musical.

"For a musical to be successful today, it has to be perceived as somehow pushing the format forward, as Moulin Rouge and Chicago did," Muir adds.

"As an experience, ‘Rent’ has always been willing to embrace darkness along with a pop-sound score. Its timing may finally be right."

Rent is currently in theatres.