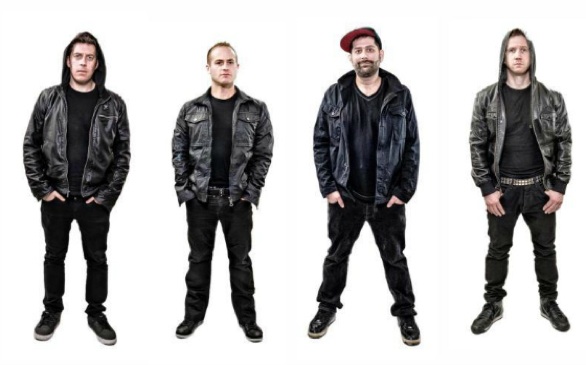 Conspirator has a new EP called Unleashed out.
(Credit: theconfluencegroup.com)

Marc Brownstein has watched the state of electronic music transform dramatically since founding trance fusion pioneer The Disco Biscuits more than a decade ago. In that time, he’s seen once-popular genres like big beat and techno get pushed aside while dubstep and trap soared into mainstream pop culture.

But as a longtime fan of EDM, Brownstein wasn’t willing to sit there and let such change unfold all on its own.

In 2004, he formed Conspirator with band mate Aron Magner (keyboards) and DJ Omen as an outlet for exploring their interests in electronic music production.

Now after opening eyes at some of the biggest U.S. festivals over the last two years, Conspirator continues to push the envelope with its latest EP, Unleashed, and a 28-city tour featuring RAQ guitarist Chris Michetti and Pendulum drummer KJ Sawka.

Ahead of Conspirator’s March 13 show at the Central Social Aid and Pleasure Club, Brownstein spoke with Campus Circle to discuss what exactly fans can expect when the quartet hits the stage in Santa Monica.

CC: How do you and Aron keep a balance between your work with The Disco Biscuits and Conspirator, and how do you avoid overlap between the two projects, particularly when it comes to the songwriting process?

MB: It just sort of all happens naturally. We both don’t try to think about it too much. The Biscuits have played heavily for 16 years and written 160 songs. We could play eight shows without repeating a song right now at any point in time. If we wanted to play an eight-show run like we did in December, we could come out and play eight shows without repeating barely any music. The fans are there, and they’re ready to rock at any time.

Conspirator is a trickier thing; it’s a new project. Despite the fact that we’ve been playing as Conspirator since 2004, what we’re doing now is new. We’re on our fifth tour, and we’re regularly getting to towns that Conspirator has never played in like Indianapolis and Birmingham, Ala. It’s a band that has been around for eight to nine years that really wasn’t a band — it was more of a side project.

Now, we’ve put our time into Conspirator and because we’re on tour so much, we’re writing a lot for Conspirator. We still have a small catalog and basically can only play one or two shows before circling back around. We’re trying to fill out our Conspirator catalog so that when we tour, it’s really fun, new and interesting.

MB: When we write for Conspirator, we write as a team. Chris drives the production. That isn’t to say there aren’t songs Conspirator has played that Chris, Aron or myself hadn’t sat down at a computer and started writing. But generally, if there are vocals and it’s written on a guitar or bass, we’re writing it for the Biscuits.

The bands are stylistically so different right now. What’s nice is that Aron and I have this outlet when it comes to our passion for electronic music where we don’t have to force a new style and try to make the Biscuits into something that it’s not. That was something we were struggling a little bit with because we were so inspired by the EDM boom over the last couple of years. But it’s so different than The Disco Biscuits that it’s easier to just go over here and let it be its own thing.

CC: You’ve confessed before how much you love dubstep, and Unleashed seems to mimic that sentiment with dubstep influences featured throughout the EP. What ultimately dictated the decision to go in that direction?

MB: It wasn’t a decision. It’s just what it is and where we’re at. Not we — the royal we. That is where we are all at. Our newer band is influenced by the things that exist now. That’s just how it is when you start a band. It’s your influences and what you listen to.

…People are always and will forever compare one band to the next. But comparing a band that was influenced by Phish and Santana to a band that’s influenced by Major Lazer, Flux Pavilion and — dare I say — Skrillex, it’s going to end up sounding different. But we’re staying true to who we are and are playing our instruments. And we’re hoping that what ends up happening is kind of what you’re describing where we make something new that’s dubstep influenced, but it’s not just dubstep. Yeah, so we use some low-frequency oscillation filters and some of our songs are at 140 beats per minute…we find ourselves constantly having to defend ourselves about dubstep. It’s a constant barrage of “Why do you guys play dubstep?” and the answer is “Because we like dubstep.”

CC: The Disco Biscuits decided to release Otherwise Law Abiding Citizens for free in 2011, and now Conspirator has done the same thing with Unleashed. Knowing that the music industry has turned into a touring-first type of business, will that be your plan for all the albums you work on going forward?

MB: It’s been proven that you do more business when you make your music available for free. I just don’t know why anyone would want to go backwards. We’re always trying to move forward with everything. You’ve got to change with the times, and if you can’t, you’re going to be a dinosaur.

CC: What are you guys doing differently on this tour that you haven’t done on previous ones?

MB: This tour has been really exciting for us. Ninety-six percent of the shows on this tour we’ve seen a substantial amount of growth from where we were on the last tour. I think it’s just natural when you go out and play and play and play. We have four brand-new songs and one cover song that we’ve been doing, so 40 minutes of our 90-minute set is brand-new music that people have never heard before. The other half of it we’re switching out between the rest of the new material and one or two older songs. Ultimately, you want the show to have a natural flow to it.

CC: For a city that has never seen Conspirator before, how do you juggle between playing old and new material?

MB: We concentrate on giving every city the best possible show. For us, that means playing the most inspiring show and the stuff we’ve been writing most recently. Conspirator is a younger band, so the new stuff is the best stuff. We have four guys drawing our influences all together and coming up with this new thing that is really exciting and high energy. It’s all a natural progression with music.

CC: So where do you see electronic music in five years from now?

MB: What we should be concerning ourselves with is where electronic music is going to be in five weeks from now. It’s moving so fast. Four weeks ago, “Harlem Shake” was a song that very few people knew what it was. I admit that I am a big Baauer fan and have been a fan of “Harlem Shake” the whole time. When you’re a musician and a new style of music comes along, you jump on it and learn it. We’re like DJs. You need to know all the songs and know all the styles. Three weeks ago, no one knew who Baauer was. Today, he’s on the cover of Billboard magazine and No. 1 on iTunes in seven different countries. That all happened in three weeks.

Even when the EDM boom craze dies, Bassnectar and The Disco Biscuits won’t go away. The periphery will fall down, and the people who blew up instantly might not survive. But the people who have been doing this for years and years and years have the loyalty of their fan bases. What I’m concerned about is that we continue to go out every year and slowly build without concerning ourselves with what’s around us. It’s more about connecting one by one with the fans and making that relationship strong and long lasting.