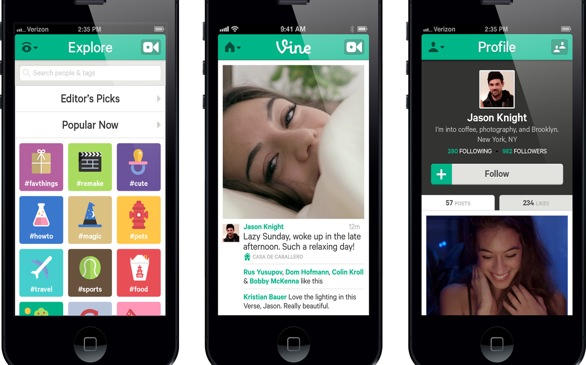 Vine lets you make six-second videos and post them on your Twitter for friends and followers to see.
(Credit: vine.co)

What can you do in six seconds? For most people, six seconds is not enough time to do anything that interesting. You can take a sip of coffee, sneeze or scratch your nose, but it doesn’t get any more fascinating than that.

However, in just six seconds, artist Marlo Meekins can seductively cut off her tank top and reveal… her dog underneath it. Will Sasso can walk around Canada impersonating Bill Cosby. And Crusoe Dachshund, the Weiner dog, can make a gourmet pizza.

How can they do all that in such a short amount of time? Well, they have some help from Twitter’s new video app called Vine, which allows users to create six-second long video clips.

Similar to Twitter, which limits the number of characters people can write, Vine’s limitations are also meant to heighten and fuel creativity. At first, six seconds sounds like an outrageous challenge. However, after trying the app and seeing how it works, the time limit mark becomes fathomable and an exciting challenge. With the app, people are already generating truly artistic, provocative and stimulating videos, some of which should belong in museum galleries.

However, when Vine first launched in January 2013, it quickly received criticism for having loose guidelines regarding inappropriate or pornographic content. Apple’s App Store guidelines prohibit applications that allow users to easily access pornographic user-generated content, so Vine had to do something about the problem.

Despite criticism involving censorship and explicit material, Vine is growing in popularity amongst Twitter followers. The app has a very simple and inviting interface, so it is very user friendly. There is only one button needed to record a video, and there are no fancy editing devices to allow users to add different filters. Even if you have never made a video, Vine makes the technical process very easy to learn.

The true potential of Vine, however, is in the ideas and creativity of its users. For instance, Vine’s capabilities are already being explored by some of its aficionados like actor Will Sasso. Sasso constantly makes the “Popular Now” list with his Arnold Schwarzenegger and Bill Cosby impersonations. Some of his most admired posts are the “Word Repeat With My Adorable Italian Mother” videos which feature him saying a word like “Whoopi Goldberg” followed by a video of his mother attempting to say the same word with her thick Italian accent. Clever and humorous videos such as this truly show what can be done in just six seconds.

Another popular and highly followed Vine user is Brittany Furlan, who makes comical videos using her two dogs as characters, often ending posts with her signature line, “Puuurfect.” What’s interesting about Furlan is that she uses recurring motifs, characters and ideas in her posts, making her Vines work individually and as a part of a greater whole. It’s almost as if her six seconds can tie together into one giant Vine featuring her amusing perspective of life in L.A.

Overall, Vine goes a step beyond Instagram by permitting users to share short films rather than images, which allows more dynamic elements, such as movements and sounds, to play a bigger role in creativity. Because of this, people are making well-choreographed glimpses of comical, heartwarming, beautiful, tragic and magical moments of life that they can easily share with others.

WHY YOU SHOULD GET VINE
1. It’s Easy – It is extremely easy to create a Vine account, especially if you already have a Twitter account. Once your account is made, using the app’s features requires knowing how to press a button. Think you can handle that?
2. It Spurs Creativity – Once you start your Vine account, you will start to see the world in a more artistic way. You will start to look at things with a more critical and artistic perspective and wonder, “How could I make this into an interesting Vine?”
3. It Adds Color to Your Social Media Image – If you are trying to increase your social media following, Vine allows you more opportunities to capture people’s attention.
4.  It’s Entertaining – Viewing other people’s videos is one of the best things about the app. It allows you to follow people you like, find hashtags and view the most popular videos of the day.
5. It’s Fun – Ultimately, making short videos with your friend, dog, cat, food, hand, car, etc. is very fun and will get you laughing.