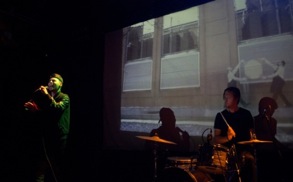 If anyone needed proof that R&B is still very much alive and well in 2013, they only had to step inside the Troubadour on Tuesday night for Autre Ne Veut’s first stop in Los Angeles.

The Brooklyn avant-pop act penetrated the music scene almost three years ago with its self-titled debut, but the release of Anxiety on Daniel Lopatin and Joel Ford's Software label late last month has brought even more attention to Arthur Ashin’s project.

The Hampshire College grad got his start as a jingle writer for a NYC production house several years ago, but he’s since touched fans by crooning about larger-than-life subjects such as death, love and, of course, anxiety.

At the Troubadour last night, a room full of young professionals cheered Ashin as he joined a backup singer and drummer before quickly diving into material off the 10-track Anxiety.

Opening the show with the sexy “Play by Play” and exhilarating “Ego Free Sex Free,” it was easy to see why the 30-year-old has drawn comparisons to Prince and The Weeknd’s Abel Tesfaye. Throw in high-pitched synths and soulful harmonies, and you can even hear traces of Yeasayer and Bon Iver from time to time.

But while Ashin’s voice is every bit worthy of the applause it’s received so far, Autre Ne Veut’s sound remains better suited for a studio than a stage. Ashin’s backup singer, set behind a laptop and mixing board, did little more than press the play button at the start of each song while his drummer often kept time with simple quarter-note rhythms.

At one point during the performance, Ashin’s backing band left him alone so he could hash out a new song. The number lasted only two minutes before he declared “that’s all I got,” leaving some spectators wondering why he even chose to play it in the first place.

Autre Ne Veut’s set lasted roughly 50 minutes, but Ashin made sure to save his best for last as he closed with hit single “Counting” and went on to stare into the crowd for several seconds afterward.

Although there is little doubt about Ashin’s lyrical and vocal talents, it remains to be seen if Autre Ne Veut can become a band that rouses audiences through its live shows.