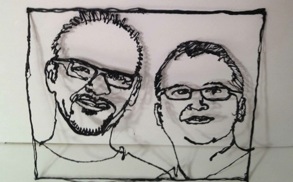 Maxwell Bogue and Peter Dilworth are the founders of WobbleWorks and the minds behind the 3Doodler.
(Credit: the3doodler.com)

Whether you’re an artist getting your MFA or an engineer with a knack for crafty Pinterest endeavors, there’s no doubt you’re going to be intrigued by the new toy that is transforming 3D printing.

Touted as the world’s first 3D printing pen, 3Doodler promises to erase traditional 3D printing and give the user complete control, all in the palm of their hand.

3Doodler first caught the attention of investors on Kickstarter, a crowd-funding website for creative projects. Within just a few hours of launching on Feb. 19, they surpassed their goal of $30,000. Since then, 3Doodler has garnered the backing of more than 20,000 investors, reaching almost $2 million to date.

So what exactly does this little famed pen actually do? It allows users a unique level of precision for drawing in the air or creating 3D “ink” drawings on paper.

“As 3Doodler draws, it extrudes heated plastic, which quickly cools and solidifies into a strong stable structure,” states the 3Doodler Kickstarter page. This allows the user to create virtually anything they want.

They’re also in the process of creating stencils for the pen, which can be downloaded on the website and printed free of charge. These stencils will allow novice 3Doodler users to easily create just about anything their hearts desire.

Campus Circle had a chance to talk to Maxwell Bogue and Peter Dilworth, the founders of WobbleWorks and the men behind the creative genius of 3Doodler. They spoke about the success of their new product and where they see themselves going in the future.

Campus Circle: Where did the idea for the 3Doodler pen come from? How is it going to revolutionize 3D printing?
Max Bouge and Pete Dilworth: The idea came about as we frequently use our own 3D printers for rapid prototyping. We wanted to see if the process could be sped up and made "freer" by placing the parts of the 3D printer in a pen form. The first iteration was called the teacup, basically an extruder with a handle. It worked horribly, but it did work. The team then added to this, creating a unique cooling mechanism and evolving to the 3Doodler you see today. WobbleWorks is an emerging toy and robotics company with big ideas. Our mission is to create affordable, cutting edge toys and robots that inspire and delight our customers the world over. Because of the price of 3Doodler, it revolutionizes 3D printing by making it affordable for everyone.

CC: What are your future hopes for this product? What parts would you like to expand upon, and do you see any similar products in the future for WobbleWorks?
M&P: We're super committed to bringing the 3Doodler to production, and the company's focus is squarely on that right now. The company does have other products that will be coming to market this year, but most of these will go down the traditional toy distribution channels. 3Doodler is a very different animal, so expect to see a lot more from the team as we refine and add to it.

CC: What is your target demographic for the 3Doodler?
M&P: 3Doodler is for crafts, 3D print enthusiasts, artists, hobbyists...anyone who likes Doodling – novices and advanced.

CC: When can we expect to see this product on the market?
M&P: The Kickstarter process is pretty consuming, and we are very much focused on delivering a good experience and good product to our backers. Theirs will be the first products shipped, followed by 3Doodler site pre-orders and then wider sales channels. We will start to look at wider distribution after the Kickstarter ends.

CC: Can you explain a little bit more about your partnership with Etsy artists?
M&P: We really wanted to show people that 3Doodler is not just a tool for 3D printing enthusiasts, but also for artists, crafters and hobbyists. The team all knows and loves Etsy, so it seems the obvious place to look.

We immediately started to search for wire artists, as this was the medium that seemed closest in end-product look and feel to our own 3Doodles. We then spent some time narrowing down the group to those whose work we really liked and felt could be easily adapted to 3Doodling. With a short-list of eight to 10, we started approaching the artists. Amazingly, the top five jumped at the chance to learn more.

3Doodler is expected to start shipping by September 2013. To pre-order your 3Doodler, click here.

Tech
Looking to spend some of that holiday cash you got? Try these tech ideas on for size
309 views

Tech
Gadgets: Past and present combine in mini turntable
546 views