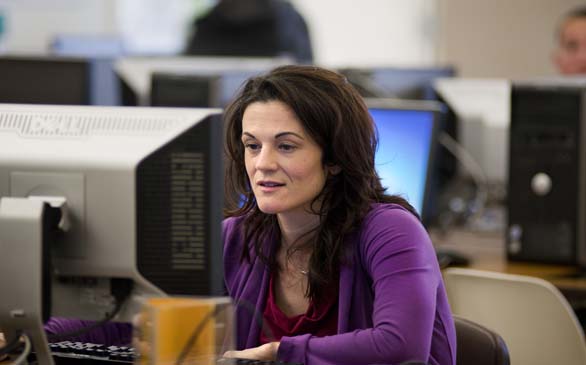 Students locked out of overcrowded core courses at California's state colleges and universities should instead be able to take those classes online, according to legislation introduced Wednesday in Sacramento - sending shock waves through academia nationwide.

The bill by state Senate President Pro Tem Darrell Steinberg, D-Sacramento, calls for the development of 50 online classes as potential substitutes for the most oversubscribed lower division courses required for graduation at the University of California and California State University systems and at the state's community colleges. In a controversial portion, the proposal would allow these classes to come from commercial providers or out-of-state colleges if their academic quality passes review by a panel of California faculty.

"The world is changing. Technology is a growing force in our lives and we want to use it to try to help as many young people as possible be able to achieve their dreams and compete in the modern economy," Steinberg said during an online group video chat.

His bill, SB 520, Steinberg said, would reshape higher education by partnering it with the technology "to break the bottleneck that prevents students from completing courses." He described it as the first such effort in the nation.

While some California academics did not want to publicly criticize such a powerful figure as Steinberg, they said they feared that the quality of education could suffer and teaching jobs could be lost if state schools lose control over part of their curricula and allow more private companies to get involved.

Cal State faculty union President Lillian Taiz issued a statement pledging to work with Steinberg but pointedly added: "We want to maintain academic credibility and the delivery of accessible, quality public education, rather than chase the latest private sector fad."

Some experts said the proposal could ease financial pressures on colleges and universities and improve graduation rates.

Steinberg's bill could be "a watershed moment for higher education" and encourage the rest of the nation to take similar steps, said Dean Florez, a former California state senator who is president of the Twenty Million Minds Foundation, a Pasadena-based organization that seeks to widen access to online learning and helped shape some of the bill's ideas.

With the state Senate leader behind it, some form of the legislation will land on the governor's desk even if details change, predicted Florez.

UC, Cal State and California community colleges are working to boost online learning, with Gov. Jerry Brown advocating forcefully for such a goal and offering extra funding for it in next year's budget.

For example, in January, San Jose State began a partnership with the for-profit Udacity organization to offer more low-cost online classes in entry level subjects. The same week, UC system leaders pledged to have UC students take about 10 percent of classes online in a few years.

On Wednesday, Daphne Koller, the Stanford University professor who is a co-founder of the for-profit Coursera firm, said she thought that Steinberg's plan would help more California students finish college on time, and show that massive open online courses - so-called MOOCs - offered through groups such as hers are rigorous enough for college credit.

Under SB 520, the UC, Cal State and community college systems would each have three faculty representatives on the panel to certify online courses for credit. Among the factors to be reviewed would be whether the classes provide enough interaction with instructors. Though online courses would offer limited face-to-face connections, the students are "still in an institution that provides a lot of support for them," said the bill's co-author, Assemblywoman Cristina Garcia, D-Bell Gardens.

The bill does not specify fees for the courses, but Steinberg said the costs should be comparable to or less than current ones. The bill also does not provide separate funding for administration or outline how many online classes can be taken for credit.

Patrick Callan, president of the Higher Education Policy Institute, a think tank in San Jose, said the bill is a major step because until recently, California colleges had been slow to innovate.

"It appears that up until this year that (the schools) preferred to turn away students than try these new ideas," he said.