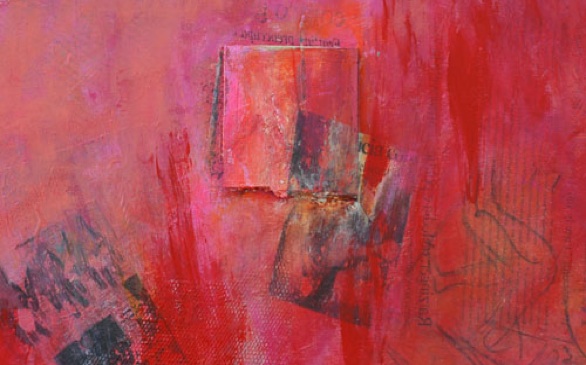 Teachers have a huge impact on their students. Good or bad - one cannot deny their influence. They often lead us to a destination where we may never have ventured.

For artist Julienne Johnson, that was just the case. Teachers have inspired her throughout her life's journey, and a few stand out from the rest. The first, an Estonian substitute art teacher, observed her artistic talent in primary school and sought to mentor her. Now, years later, the late artist Franklyn Liegel, her teacher and mentor (Art Center College of Design and Otis College of Art and Design), has inadvertently led her full circle to her latest exhibition.

While in his classes, Johnson attended his exhibition opening in 2007, and now she follows in his footsteps with an exhibition in the same gallery: LA Artcore – Brewery Annex, which opened on Sunday March 3 and runs through March 29.

For the closing of the show, Johnson has coordinated a poetry reading: SPOKEN Word & Paint, featuring Jack Grapes and Peter Frank, who will read against a backdrop of the exhibition. The event takes place Friday, March 29 at 7:30 p.m.

Frank is an art critic and curator (Huffington Post, Fabrik magazine, former senior curator of the Riverside Art Museum). He has been writing poetry for the past 50 years.

When asked what inspires him, he replied, "Sounds and images, real and imagined."

He explained that being an art critic adds to the process of writing poetry. "I take most of my inspiration from extra-verbal stimuli, including visual art and music,” he said. “Conversely, my current critical style allows me the pleasure I take in words and phrases themselves (although not, I trust, at the expense of the images and objects I'm discussing)."

Before Johnson had even met the renowned art critic, she was learning from him, avidly following his trail of essays through the most prestigious of art publications and seeking out venues where she could hear him speak.

"I was particularly attracted to the poetic device and metaphoric language that Peter used in his essays to add clarity to his critiques," said Johnson.

When asked what it was like to once again be working with Frank, she replied, "Joyous! Peter was immediately receptive to the idea. I am not going to forget this - ever. Best of all - it's thrilling for me that with this reading, I will have played a part in exposing Peter's pure poetic expression to those who have known him for years without knowing him as a poet."

Speaking fondly of her other mentor, Johnson said, "Jack Grapes was my poetry teacher, and he taught me that I, too, had a voice.”

She continued, “He's like the teacher Robert Frost was talking about when he said, 'There are two kinds of teachers: the kind that fill you with so much quail shot that you can't move and the kind that just gives you a little prod behind and you jump to the skies.' Jack's that kind of teacher. I have so much respect for him."

Grapes often finds inspiration from his colleagues. "I've been influenced by so many different poets from the last two millennia,” he cited, “and I've allowed those influences to have their way with me, much like a kid in a sandbox playing with different kinds of toys.”

Teachers have always been important to Johnson, who admits that she's managed to surround herself with mentors who are considered the "best" in their perspective fields. She has high hopes for the future and will continue to create, learn and challenge herself as an artist.

"A good life is about learning," laughed Johnson.

LA Artcore – Brewery Annex is located at 650 A. South Avenue 21 (in Lincoln Heights) Los Angeles, CA 90031. Please RSVP julienneART@me.com if you would like to attend the Spoken Word Event on March 29.

Art
Homeless artist wants to ‘be the light’ on LA’s skid row
1,472 views

Art
Muralist Robert Vargas is painting a towering history of LA above the traffic
5,381 views