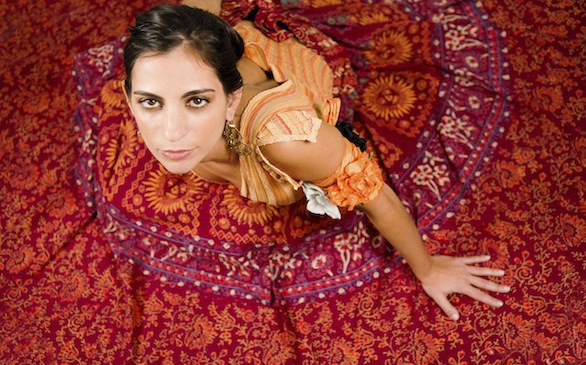 Argentine Sofia Rei not only sings and composes, but also teaches at Berklee College of Music.
(Credit: Emra Islek)

The beautiful nation of Argentina is known for many things: soccer, tango, an electrifying culture and delicious food to name a few. However, without a doubt, the South American country is also highly regarded for its music, which is where vocalist, composer and professor Sofia Rei comes into play, respectively.

A New York resident, Rei is a talent like no other. Aside from singing and composing, Rei is a professor at the prestigious Berklee College of Music. Under her own label, Cascalabelera, and via Lilihouse Music, she released De Tierra y Oro (Of Earth and Gold), an album sporting 11 tunes. She produced the project with her longtime bassist and collaborator Jorge Roeder. Additionally, Fabrice Dupont served as co-producer.

During a phone interview, Rei spoke to Campus Circle about her passion for music, musical influences, De Tierra y Oro, teaching and social media, among other things.

Campus Circle: How did you discover your passion for music, and how is it you decided to enter this industry?

Sofia Rei: I began to sing when I was little, since I was about 4 years old. I imagine my parents wanted to have at least one musician in the family since I come from a family of people who do many different things that have nothing to do with music. But they noticed that I really liked it, and so I began to sing in choirs and local groups. I also sang at The Teatro Colón with the children's choir. The Teatro Colón is the main opera house in Buenos Aires, and it was very exciting to be at that stage with the orchestra and the choir. And that's when I realized that this is what I wanted to do for the rest of my life.

CC: What have been your musical influences as a child and throughout your career?

SR: Well, I am a classically trained musician, so I have studied classical music extensively. It was an enormous influence in terms of discipline and technique. I would listen to great composers and singers, but I felt a bit limited in that atmosphere because in Argentina, it was compartmentalized. If you were a classically trained musician, playing popular music was pretty much taboo. So ever since then, I met several different people who introduced me to instrumental and vocal jazz – people like Bobby McFerrin, Ella Fitzgerald, and I remember it was something that had a profound impact on me. I was very impressed with how they used their voice as instruments, and so I began to learn as much as I could about vocal improvisation. That process led me in different directions, but it's also why I decided to come to the United States. So I could study here and study with people who really knew the subject. Over time, I've been influenced by several different genres, like punk rock, and others. I've always liked Latin music. When I came to the U.S., I began to sing more South American music and I became involved with different projects that featured music from Colombia, Perú, and Argentina. I learned a lot about each country's traditions and techniques when it came to this type of music.

CC: Do you feel that you're still learning from music and growing as an artist?

SR: Yes, of course. Anyone who genuinely devotes himself or herself to music knows that it's a never-ending learning process. The only way to grow and move forward is to have new challenges and new experiences with your music. That quest to find a new beat, a new sound, or a new manner of expression is what allows you to grow in that way. It's what you value most. I'm sure I will always be interested in other artists and music that will continue to inspire me.

CC: Let's talk about your album, De Tierra y Oro. Was there a specific concept behind it or was it something that just came to be?

SR: The album came to be because I received an endowment from The Jazz Gallery here in New York, and it was that endowment that allotted me time to compose and put it together. As I was putting this together, I realized that while the themes and subject matter of the songs varied, most had to do with experiences that an artist goes through. It showed me how one develops different characters from your songs and how all this diversity can co-exist. They could be optimistic or melancholic, but they come from the same person. It all makes up what this individual is. I feel the song that best personifies this is "De Tierra y Oro."

CC: Let's discuss two of your songs. First, “La Llorona.” You seem to approach it from a different angle. How is it that you obtain that perspective?

SR: I had heard the song many years ago, and I've heard different versions that I really liked. And so one day I had the opportunity to perform at a concert that celebrated Cinco de Mayo, and I decided to include it in the program. When I performed it, I realized I felt a very strong connection to this song, and so I decided to include a version of it in the album, but a version that was more me – closer to things I knew. My band and I have also worked a lot with Peruvian music, and there's this rhythm called lando, which comes from the Peruvian coast. I felt that this rhythm would go very well with the song, and it fit very well. The lando has a lot of mystery and sensuality, which generates a very magical mindset. When we got to the studio, this was the only song that didn't have a defined arrangement. We wanted to see how it would come out if we improvised it.

CC: How about the track, “La Gallera”?

SR: This one came from a trip I took to Colombia with a friend. He's from Barranquilla and always said I had to go see the carnivals, so I went one year. In the middle of this trip, I was invited to witness a cockfight to an island where people who work in Cartagena live. At first, I was very against the whole idea of cockfights because of the animal cruelty and all that, but after witnessing this, I realized that to these people, this serves almost as a religion – pretty much like soccer in Argentina. It was very profound to witness this. It was great to get to know these people and how they live.

CC: You're a professor at Berklee College of Music. What's that experience like? What do you teach?

SR: I teach singing, which includes many things. It's not just teaching how to sing; it involves teaching repertoire, and different genres and styles, also improvisation. For me, the most important thing is to teach these kids that they need to be individuals and self-sufficient. I teach them how to take care of any issues that might arise in their career or with their band if they're in one, and to not need the help of another musician or need to depend on another musician to solve such issues like musical direction, etc. I make sure they know what they're doing. Mainly, I aim to transform singers into true musicians – well-versed in all aspects of their art. It's very important, especially nowadays that an artist be able to do many things themselves, even outside of music itself. In the old days, you would have a singer, or the artist. Then you would have some people who would just work arranging, some on melodies and rhythms, some on lyrics, etc. But this has changed dramatically over the last few years. The singer is a lot more involved in such endeavors, and I believe this helps in developing projects. Also, it gives the artist more control and a greater sense of independence. This is why I feel it's important for aspiring singers to be aware of all this and be prepared from the very beginning.

CC: What's your take on social media and how do you use it?

SR: It's a tool, even to those who don't want to get involved in the technology side of the business. If you're an entertainer, you have no choice but to use it. There are many people who find things to do through Facebook, Twitter, etc. Social media is how the modern world mainly interacts, and it would be a complete waste to not use it as a way of communicating with your fans. I personally don't use Twitter much, but I do use Facebook, and I feel that through Facebook, I've been able to know and reach so many people that I would not otherwise have been able to reach. I was able to find all sorts of groups with people with similar interests and discover all sorts of music that was new to me. So in short, social media is an incredibly powerful tool to communicate and share things about yourself and your career as an artist.

CC: What advise would you like to give youngsters who might one day want to follow in your footsteps and become a part of the music industry?

SR: The most important thing is to know that this whole thing is a journey that never ends. There are many stops along the way, in which you will face both challenges and praise. It's a career with a dynamic unlike any other; it's a journey you make as time goes by and as you make your decisions, these take you different places. I feel the most beautiful thing about it all is the freedom of knowing that you are doing what you love – the freedom to travel and live wherever you want and just make music, getting to know different people from all walks of life, being able to share a message with the world and to have a stage to be heard. However, it's very important to understand that this freedom does not come easily; it's earned through lots of sacrifice of time, energy, etc. If anyone wants to do this, it can't be for what you expect to earn, or for fame. It has to be because you love it, and your appreciation for the process.