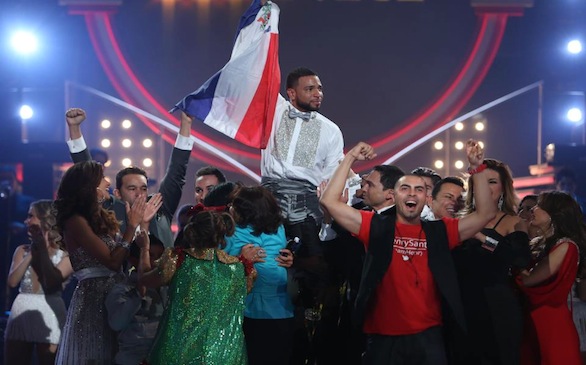 For Henry Santos, music has been a part of him ever since his childhood. However, dance’s managed to play substantial roles as well.

The Dominican Republic-born singer-composer Santos, who could perhaps be best known for his era with the bachata group Aventura, was crowned the winner of ¡Mira Quien Baila! last year.

“This is something that I really wanted to do,” said Santos. “I didn’t know it was going to be so much fun, and that I was going to learn so much about things that I didn’t know how to do: tango, quick step, and all these routines I never heard of. Now, I have so much respect for all these dancers who learn choreography.”

According to Santos, it’s very important to have a good diet with enough protein to be able to keep up with all the work, particularly because it’s a lot of cardio.

He added, “Personally, all the love I got from the show, it turned my life around.”

The show, which is a seasonal Spanish-language reality show that airs on Univision, is currently on tour. Next stop: Los Angeles.

Santos says that this production is a must-see.

“It’s two acts of 45 minutes each, where they’re going to be able to see and be part of the show,” said Santos. “We’re going to have performances. I, myself, will be singing two songs. There’s new choreography. It’s sort of like a Broadway show, and it’s going to be so much fun. It’s going to be a very good show for the whole family. I encourage everyone to come out and enjoy the show.”

During his time with Aventura, Santos served as a back-up singer. But he also was the lead singer in various songs, and he composed and produced several tracks. And, of course, he danced.

But what does he prefer: singing or dancing?

“That’s interesting; it’s actually a combination of things,” said Santos with a big laugh. “Now that I’m able to do both at the same time, it completes me as an artist. I don’t see myself doing one without the other now. Both compliment each other, and I’m happy.”