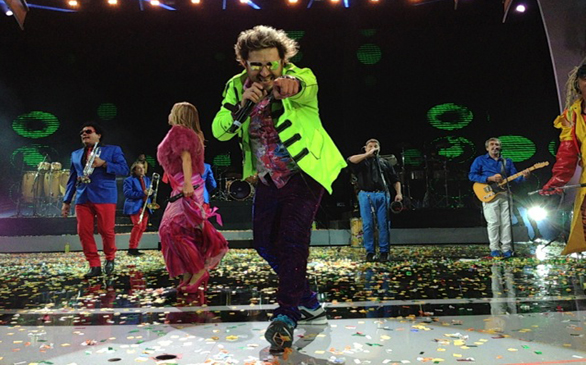 When ska and Latin American rhythms are combined, nothing but excellent and fruitful music is produced. The same could be said about Argentina’s Los Auténticos Decadentes, who been active in the industry since 1986.

Jorge Serrano, who performs vocals, guitars, choirs and the occasional and the Pinkillo (South American flute found throughout the Andes), acknowledges that the group’s influences vary.

“Our main musical influences have come from the old ska and reggae bands,” said Serrano, who noted he’s thrilled to be a part of the music act. “But also, we've been influenced by all sorts of Latin American music, like cumbia, boleros and regional Mexican music. In short, all sorts of folk music from Latin America; also, obviously rock music.”

The 12-member band is considered, to many, the best there is out of Argentina. And their unique artistic name has provoked the curiosity of people to know how it came to be. Los Auténticos Decadentes translates to The Authentic Decadents, and Serrano mentions the group established the name before he joined.

“(A) group of friends who called themselves the decadents because they either didn’t have girls or didn’t have money or things just simply wouldn’t work out,” he said. “So when they became a band, they decided to call themselves Los Auténticos Decadentes. So really the name came to be long before the band was formed, and when I was invited to join the band, the name was already in place.”

Los Auténticos Decadentes remains a popular music entity known all over the world. They’ve released more than 10 albums over time.

And what’s prompted so much prolific songwriting?

In the 1980s, technology stood at a place where it was gradually growing. At that time, social media (Facebook, Twitter, YouTube, Instagram, etc.) didn’t exist, particularly for artists to be a part of it as they are currently. Serrano suggests it’s a great tool for all acts, specifically those that are new.

“Social media as a whole is very important for bands, especially up-and-coming bands,” explained Serrano. “To them, it’s something invaluable. It’s a great way to keep your fans informed.”

Los Auténticos Decadentes is coming off a spectacular run in Chile, where they performed in front of thousands of fans at the Viña del Mar International Song Festival. Fortunately, for the Southern California crowd, the group is embarking on a U.S. tour that’ll lead to them performing just east of Los Angeles.

“We’ll be there on March 20 in Pomona; we invite everyone,” said Serrano. “It’s going to feature songs from our entire repertoire, dating back to the beginning. Everyone will have a great time and thoroughly enjoy themselves.”