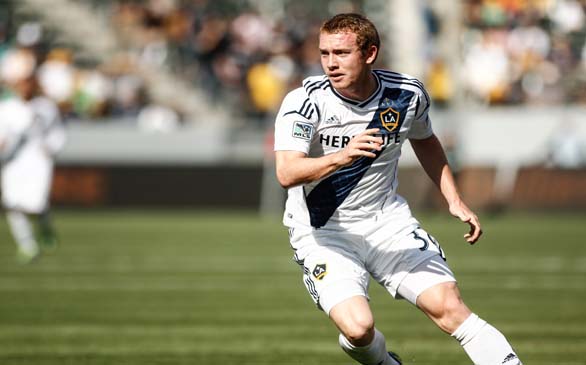 Jack McBean, who came off the bench, scored for the L.A. Galaxy.
(Credit: Rafael Orellana)

The Los Angeles Galaxy and Chivas USA managed a 1-1 tie on St. Patrick’s Day Sunday during the first leg of the SuperClásico at The Home Depot Center in Carson.

Off the bench, striker Jack McBean penetrated the back of the net to give the Galaxy a 1-0 edge in the 83rd minute of play. Six minutes later, however, a Galaxy defensive breakdown led to Chivas USA’s Carlos Álvarez scoring the game-tying goal.

“It’s not my goal; it’s the whole team’s goal,” said Álvarez. “We were all fighting for this game, and we kept on fighting for each ball. The team deserves this.”

“I think it was a poor performance on our part today – bad game, a lot of fouls, a lot of time-wasting,” he said. “Not well played on our part, obviously. A terrible effort in closing the game.”

On the other side of things was José Luis “Chelís” Sánchez Solá, the coach of Chivas USA. He asked for respect.

“On the field, we won a point, but off the field we won a hundred points in respect,” he said. “At this point, when we talk about respect, we are a team that deserves to be champion. Our rival is one of the best in the league; they have my admiration and respect for what they do. As for my players, as usual, they kept on fighting, made a great effort, and I would like for everybody to respect that effort. I would like for this institution to be respected as well; that is the way it should be. This institution deserves respect.”

“Certainly, give them credit,” said Arena about Chivas USA’s play against the two-time defending MLS Cup champion. “They played real hard. They go in on every play. There was a lot of fouling. I wouldn’t even know what all the fouls would be, but he didn’t get all of them. They fouled us as much as they could. They got away with as much as they could, but that’s all a part of the game. That’s not surprising. Going into the game, their style of play—that’s what we anticipated. So there are no excuses on our part.”

The Galaxy almost broke the scoreless draw 30 minutes. Brazilian midfielder Juninho served a free-kick pass to Omar Gonzalez’s head at the back post. Gonzalez then re-directed the leather just outside the opponent’s goalkeeper’s box, where forward Jose Villarreal attempted a header that hit the top crossbar.

At the 40-minute mark, defender Joaquín Velázquez received his second yellow card after a questionable foul call from the central official. Velázquez was sent off the field after being ejected; he left laughing while arguing the decision at the same time. Still, the Galaxy only managed to score one goal. And, the fact that Chivas USA came back to knot the match at one, showed it wasn’t a good day for the Galaxy.

Several offensive attacks took place for each team before halftime, and the same occurred before McBean netted his first score of the year.

“It was good to get a goal, but I would rather have the team win the game,” McBean told reporters afterward.

The Galaxy entertain the Colorado Rapids on Saturday, March 23, while Chivas USA visits the Chicago Fire on Sunday, March 24.

When asked how the team could rebound from such a poor performance, Keane said, “Simple. Just win the next game."