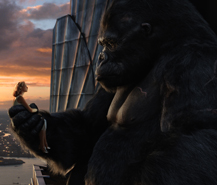 Untitled Document And a King shall rise to lead them – to the multiplex, that is. Hollywood bean counters are banking on Peter Jackson’s mega-budget King Kong to be the hot ticket in a holiday movie season packed with offers you can’t refuse – and help overcome the box-office doldrums that have plagued the film industry all year.

Fortunately, the year-end season is also the time when the studios unleash their Oscar hopefuls in earnest, which means you should have a choice of plenty of worthwhile pictures.

Heading your way for the holidays are new films by Steven Spielberg, Ang Lee and Neil Jordan; not one but two big-budget musicals based on Broadway hits; literary adaptations for grown-ups and kids alike; a horror movie, a cartoon or two, a handful of sequels and yes, even a Jim Carrey comedy.

Here is a list of movies due for release between now and January. There’s a good chance many of next year’s Oscar winners are lurking somewhere within it.

The Ice Harvest: On a snowy Christmas eve, two men (John Cusack and Billy Bob Thornton) attempt to skip out of town with $2 million stolen from a local crime boss (Randy Quaid). Directed by Harold Ramis (Groundhog Day, Analyze This).

In the Mix: A mafia don assigns his right-hand man (Usher Raymond) to protect his daughter, unaware the pair are in love with each other.

Just Friends: A successful music executive (Ryan Reynolds) runs into the woman (Amy Smart) who broke his heart 10 years before while they were still in high school – and he was 100 pounds heavier.

Ushpizin: Billed as the first movie made by ultra-Orthodox Jews, this comic drama centers on a married couple who pray for help during a financial crisis and receive an unexpected reply – in the form of two criminals who show up on their doorstep.

Yours, Mine and Ours: Dennis Quaid and Rene Russo are two single parents who get married and move in together with their respective children – all 18 of them.

The Chronicles of Narnia: The Lion, The Witch and the Wardrobe: Director Andrew Adamson (Shrek) attempts to do justice to C.S. Lewis’ classic fantasy novels with this first installment in an intended franchise about the strange land where animals talk and magic is real.

King Kong: With a final running time of three hours, made at a budget-busting cost of $207 million, Peter Jackson’s eagerly awaited remake of the 1933 classic is already drawing comparisons to Titanic. Naomi Watts stars as the beauty who captures the big ape’s heart. Jack Black and Adrien Brody co-star in what promises to be a knockout, jaw-dropping extravaganza. With a price tag that big, it better be.

Memoirs of a Geisha: After languishing in studio development hell for several years, Arthur Golden’s bestselling novel finally comes to the screen. Rob Marshall (Chicago) directs Ziyi Zhang (House of Flying Daggers) in the rags-to-riches tale of a poor girl who becomes a renowned geisha in 1930s Japan.

Cheaper by the Dozen 2: Steve Martin and Bonnie Hunt reprise their roles as the beleaguered parents of 12, this time competing against a neighbor (Eugene Levy) and his brood of eight while on vacation.

Fun with Dick and Jane: Jim Carrey and Tea Leoni take over from George Segal and Jane Fonda in this remake of the 1977 comedy about a married couple who turn to crime to maintain their upper-class lifestyle.

Breakfast on Pluto: Writer-director Neil Jordan returns to Crying Game territory with this story of the misadventures of a transvestite cabaret singer (Cillian Murphy) who becomes embroiled with the IRA in 1970s London.

Hoodwinked: Animated re-telling of Little Red Riding Hood centers on two detectives (voiced by Xzibit and Anthony Anderson) responding to a domestic disturbance call at the house of Granny (Glenn Close), where a wolf (Patrick Warburton), a woodsman (Jim Belushi) and Little Red herself (Anne Hathaway) all have a different story to tell.

Munich: Repeating his 1993 one-two punch of Jurassic Park and Schindler’s List, Steven Spielberg follows up this summer’s popcorn hit War of the Worlds with this fact-based drama about the hunt for the Palestinian terrorists who murdered 11 Israeli athletes during the 1972 Summer Olympics. Eric Bana, Geoffrey Rush and the soon-to-be-James Bond Daniel Craig co-star.

The Ringer: The Farrelly Brothers (There’s Something About Mary) produced this comedy about a con artist (Johnny Knoxville) who pretends to be mentally handicapped in order to compete in the Special Olympics.

Transamerica: Felicity Huffman ("Desperate Housewives") is getting early Oscar buzz for her portrayal of a pre-operative transsexual man who discovers she has a son (Kevin Zegers).

DEC. 25p> Mrs. Henderson Presents: In order to reverse sagging attendance during World War II, a pair of London theater owners (Judi Dench and Bob Hoskins) decide to give the people what they want: Nudity!

The Producers: Nathan Lane and Matthew Broderick reprise their roles from the Broadway smash, playing a pair of schemers hoping to get rich by mounting the worst play in the history of theater. Uma Thurman co-stars for director Susan Stroman, who also directed the Broadway version.

Rumor Has It: Jennifer Aniston stars as a woman who discovers her wacky family may have inspired the classic movie The Graduate. Kevin Costner, Shirley MacLaine, Kathy Bates and Mark Ruffalo co-star for director Rob Reiner, who stepped in after the original director, Ted Griffin, was fired after filming commenced.

Wolf Creek: A trio of spring breakers encounter the ultimate evil in the Australian Outback. Thoroughly terrifying debut for writer-director Greg McLean, who knows what he’s doing - and is exceedingly twisted.

Casanova: Heath Ledger plays the legendary playboy, who is befuddled when he gets his first taste of rejection at the hands of a beautiful woman (Sienna Miller). Jeremy Irons and Lena Olin co-star for director Lasse Hallstrom.

The Matador: A hitman (Pierce Brosnan) and a businessman (Greg Kinnear) form an unlikely bond in this well-received festival-circuit staple written and directed by Richard Shepard.

Freedomland: A detective (Samuel L. Jackson) and a newspaper reporter (Julianne Moore) team up to solve a kidnapping case tinged with racial controversy. Edie Falco, Anthony Mackie and Ron Eldard co-star for director Joe Roth. Adapted by Richard Price from his own novel.

Match Point: The consensus from last May’s Cannes Film Festival is that this drama about a former tennis pro (Jonathan Rhys-Meyers) who falls for his friend’s girlfriend (Scarlett Johansson) is Woody Allen’s best film in more than a decade.

The Libertine: In 17th century London, a mischievous and impudent earl (Johnny Depp) causes trouble and embarrassment for the king (John Malkovich). Samantha Morton co-stars as a young actress caught in the crossfire.

The Three Burials of Melquiades Estrada: Tommy Lee Jones (who also directed) stars as a Texas rancher obsessed with giving his Mexican friend a proper burial in his hometown. Barry Pepper co-stars as a trigger-happy border patrol officer.

The White Countess: A blind U.S. diplomat (Ralph Fiennes) meets a prostitute (Natasha Richardson) in 1930s Shanghai. The final collaboration between director James Ivory (Howards End, A Room with a View) and producer Ismael Merchant, who passed away earlier this year.