Admission: A Film Every College Student Can Relate To 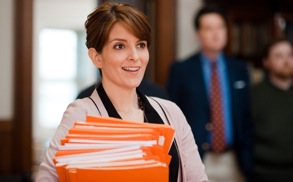 If there’s a secret code to getting into Princeton University, director Paul Weitz hasn’t figured it out and neither have the stars of his latest movie Admission.

A comedy/drama, the movie follows Portia Nathan (Tina Fey), a Princeton admissions officer who learns that a potential Princeton applicant, Jeremiah Balakian (Nat Wolff), might be the son she gave up for adoption several years earlier.

“Her life literally comes unraveled,” said Weitz, who helmed the movie About a Boy. “I have young kids ages 8, 9, 6 and 2, and I am on a daily basis confronted with my own lack of control in life and enforced humility and that made me identify with the character.”

Also starring Paul Rudd (This is 40) as a teacher who runs an alternative school, Gloria Reuben and Lily Tomlin who plays Portia’s feminist mother Susannah, the movie examines the competitive world of the college admissions process and the worries of being accepted into the top schools in the country -- a process that all college students can relate.

“There’s a sense of panic in every parent who is about to go through that process. When I told friends, especially those with children, about the film, there would be an instantaneous reaction and I would get peppered with questions,” shared Fey, a former Princeton applicant. “I did apply to Princeton, because it was a dream of my mother’s that one day I would try to go there, but I wasn’t Princeton material. I remember thinking at my alumni interview that they were not interested in me at all, that it was completely perfunctory. So I did not get into Princeton, but I went to a great school: the University of Virginia.”

Based on the novel written by Jean Hanff Korelitz, Admission captures the whole academia plus off-campus shenanigans, and many locations were actually filmed on the Princeton University campus, which was a huge relief for Weitz and screenwriter Karen Croner.

“We didn’t find out till two weeks before that we were going to able to do it, and we had some really bad names for fake universities,” joked the director. “Interestingly, they didn’t want us to shoot the admissions building, which is right on the central quad, so I had to avoid shooting certain specific things, but aside from that they were cool.”

“We were initially very nervous if they were going to let us film there,” added Croner. “Why would they? They had read the book and were very vocal about the book not being true. But when they read the script, which doesn’t pull punches, they were very supportive.”

Jeremiah’s not the typical Princeton applicant, and he’s a tough sell for Portia, who finds herself bending the admissions rules for him, putting at risk the future she thought she always wanted.

“Portia is drawn to Jeremiah,” said Fey, “although at first she can’t handle being around him. She doesn’t feel she can deal with it, but even if it’s clear that she doesn’t know much about mothering, she’s going to attempt it.”

“It’s a beautiful telling of a woman struggling with her past and how she is going to move forward and remembering a relationship that went wrong. People who read the book will be very surprised,” added Croner.

For Weitz, an Academy Award nominee, the film delves into themes of rediscovery, family and parenthood – all of which he always addresses.

Rounding out the cast is 11-year-old Travaris Spears, Wallace Shawn as the dean of admissions and Michael Sheen, who plays a Princeton professor.

“These admission officers are overwhelmed as they have so many people applying, and they have thousands of applications to read,” shared Croner. “In interviewing admissions officers while working on the script, I found that they fell into one of two groups: people who were truly passionate about finding the right kid for their school, and people who were absolutely overwhelmed and were looking for any reason to say no. The thing that is stunning to me is when you get behind those doors – if the admission officer feels very connected to particular students, they will fight for an individual student to get in for whatever reason. It’s a crazy system. There are so many kids who are waiting to hear from colleges, and I am hoping what we can do is help people see that these admission officers are overwhelmed, and everybody is in this job for so many different reasons.”

Admission releases in theaters on Friday, March 22. For more information on the film, click here.