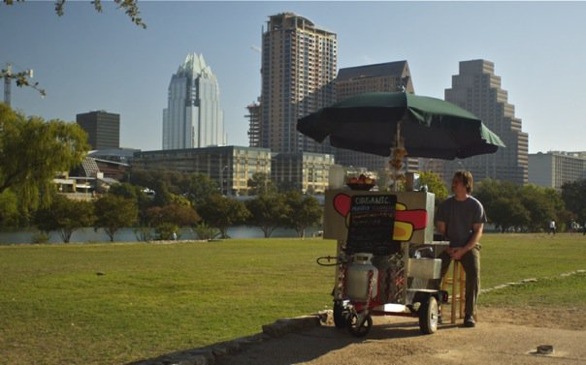 The Happy Poet, directed, written and starring Paul Gordon, follows Bill (Gordon) as he begins his journey to starting his own business: an organic, mostly vegetarian, heath food stand.

This indie comedy is about the journey of a starving artist leaving a desk job and poring the last of his money into pursuing something he believes in, which is healthy food. He attracts an unusual group of customers and supporters on this journey with his dry wit and passion-less attitude.

Bill also encounters a number of problems along the way that make it easier for him to give up or give in to the system. For instance, Bill’s dreams are knocked down when he attempts to secure a loan for his health food cart and ends up with not nearly enough money to run any business. However, like all underdogs, he refuses to give up. While working at a hot dog cart, he meets Agnes (Liz Fisher) who, despite being more personable and put together than Bill, is drawn to him. Their romance is a side fixture of the film.

The premise of this film is a good one. It takes the day-old tale of the struggling underdog fighting to overcome the odds and adds a unique comedic spin to it.

However, The Happy Poet lacks energy and focus. Mid-film, you find yourself wondering what the central plot is. It gives too much screen time to minor problems such as the pothead sidekick, which never really goes anywhere and pulls your focus away from the main story. Gordon, although playing a character that is defined by dry wit and a lack of passion, becomes too dry to even watch.

The ending attempts to add a touch of hope to the film, but it comes off as “tacked on” and out of place instead. The whole film provides a unique, dry-humored spin on the green subculture and what it takes to make it as a small business; however, the ending comes off as generic and unoriginal.

On the positive side, The Happy Poet is not completely hopeless. The film unravels in an inventive and interesting way, telling the story of a subculture and small business venture – a topic that that rarely sees screen time.

For the movie buff inside all of us, what The Happy Poet lacks in plot it makes up for with its artistic cinematography. Gordon is able to capture shots in a simplistic yet eye-appealing way. The shots draw focus to the central characters without having to zoom in tediously.

The Happy Poet takes a risk by choosing a different direction, which most filmmakers would not do. For its unique perspective, the film deserves applause and credit.

The Happy Poet releases in theaters on March 22.