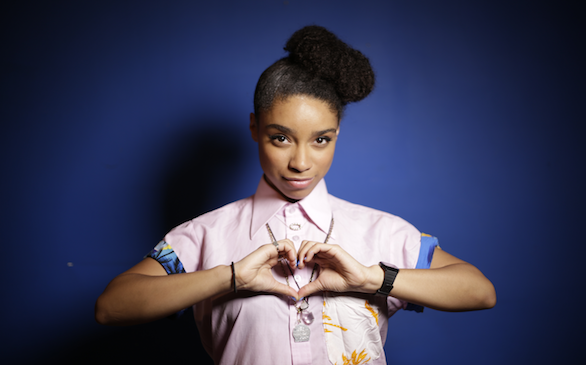 Lianne La Havas loves fashion and eating diverse food, among other things. But her true passion lies within the spectrum of music; at age 7, she found a love for singing.

During a phone interview directly from the U.K., La Havas spoke to Campus Circle about many things, include her passion for music, musical influences, inspirations, social media, the videos of “Elusive” and “Gone,” and her likes of L.A., among other things.

Lianne La Havas: I discovered that I really loved singing when I was around 7 years old. I was singing along to one of the songs in Sister Act 2 with Lauryn Hill, and I just fell in love with her voice. I wanted to copy her voice. My father played music, as well as other members of my family, and it made me want to do it as well. From then on, I realized it brought me happiness to sing songs and to play music. And my dad showed me some chords on the piano, so I was playing keyboard from the age of 7 as well, and I just carried on. I joined various choirs when I was in high school, and that helped me build up confidence a bit, and I also started writing songs in high school. Then, I started playing guitar when I was 18, so my passion has just been building and building ever since I was a child.

CC: Throughout that time, did you ever think about doing anything else besides music?

LH: Yes. I thought music was a wonderful dream, but I wondered how possible it was, really. So I was ready to become an art teacher. I was starting the process of becoming a teacher, but music just stole my heart as I was starting Art College. So I had to leave and follow my heart.

CC: Up to this point, what inspires you to do what you do?

LH: Everything, really. My life is the main thing. I think music and songwriting is basically a response to situation and feelings and you have to express them in a way that will make you feel good. That's the main reason when I had something to talk about, but couldn't necessarily talk to a person about it. I would find comfort by writing a song about it or writing poetry about it.

CC: You mentioned Lauryn Hill. What other musical influences have you had throughout your career?

LH: There are a few. I tend to like voices. I tend to lean towards female singers who have a strength about them or an interesting quality to their voice. Lauryn Hill is one of those. Nina Simone is one of those as well and Ella Fitzgerald, who's probably my favorite singer of all time. And then more recently, there are singers like Erykah Badu, whom I adore – just her whole attitude and her spirituality and how she can be very political and have a wonderful sense of humor as well, and how she can write so candidly about her life. The same with Jill Scott as well, so those are some of my main influences.

CC: Let's talk about fashion. How important is it for you to transcend who you are through fashion?

LH: The way you dress and just using fashion, I think it's an art form as well. It's designed. So I like to use it as an extension of my personality so people can have a taste of what you're like, without having to say anything. I love the way you can express yourself with clothes. I like the way that they can make you feel. Particularly as a woman, to put on a dress that fits you perfectly, is just the most amazing feeling and then you feel like you can do anything. Particularly on stage, I like to feel that way – powerful, and like I'm showing everybody who I am with my appearance as well as with my music. I think it's all a part of it, but obviously music is the most important part of it. Yet I would be lying if I said I didn't enjoy dressing up. I enjoy fashion.

CC: How do you view social media?

LH: I like to be able to speak to the people. I love meeting people and interacting with people in general, and these social networks really allow you to do that. It's so amazing that you can now do that. There are a lot of people who would never expect a really famous person to reply to them; it's just so cool. It's just a great way of communicating, and a good way to keep people updated. Say, if I'm coming to America, etc., just telling people quickly, or giving them your thoughts. And I think it's really interesting to read people's thoughts, especially with this incredible way we have now of just sharing them instantly. So I think as long as we don't abuse those social networks and everything is used correctly, it's a wonderful element in technology.

CC: Your album, Is Your Love Big Enough?, won the award for iTunes 2012 Album of the Year. How did the concept for the album come about?

LH: It started off as a collection of songs that I had written on guitar, and I knew that I wanted to sing, and that I wanted to be a recording artist but I had no idea where to start. So I decided to start playing shows with the material that I had written, and recorded that material and put it on the Internet, which is another great reason why social networks are so helpful. I put my music first on MySpace, and that was how I was able to meet people from the industry – because they would look on MySpace for new artists. That's how I met my manager, and then he was just able to play my music for all the people that it would useful for them to hear it. That's also how I met the man who ended up producing my record, who is now one of my best friends. His name is Matt Hales; he lives in Los Angeles, and he's also a singer-songwriter. I've been a fan of his for many years, but he's the one who kind of helped me find the direction of the album and helped nurture whatever it was that I did before I even knew what I was. He understood my sound before I did, and we connected so well. The album was just a collection of my feelings that I was happy to share with him and so we just expanded on it. After the course of 3 years, I made a record that was kind of like a journal spanning from my late teens to my early 20's, and I felt it was a snippet of the feelings and emotions that I wanted to talk about from the age of 19 to 23.

CC: Tell us about the videos for the tracks “Elusive” and “Gone.”

LH: The idea came from a friend of mine who directs videos; his name is Colin Solal Cardo. He's a French director. He wanted to make a dramatic love story, so it's a two-part story. “Elusive” represents what happens when you're falling in love and when you are in love. Basically, I'm in love with the guy before he's in love with me, and I seduce him. I think Colin wanted to portray me as a strong female character. So in the beginning of the video, I'm being taught by the guy I'm in love with. But by the end of the video, it's almost as if I'm now in charge. Then the second video, “Gone,” is the second part of the story where you get the feeling that we've been together, and he's done something awful, which is unspecified and now I need to seek revenge. So I end up murdering him – very glamorously murdering him in the water, which Colin thought would be a good way to represent that, because it was underwater and it was all very intense. I had so much fun making the videos, and I really enjoyed sort of taking a role of a femme fatale. That's the story behind the two videos.

CC: You have a couple of shows coming up here in Los Angeles later this month. How excited are you about this, and what can you tell us about your set? What can the crowd expect?

LH: I am extremely excited. I would actually love to move to Los Angeles one day. It almost feels like a second home because a lot of the record was recorded there, so I just love it. I think people in California, most of the time, are laid back. And whenever I go there, I feel like I can totally be myself. Whenever I play there, people seem to be so kind to us, and I just love playing there. It will be the first time I'm doing two shows in a row. I can't really describe the amount of excitement I'm feeling; it's quite a lot. I just can't wait. Everyone that's coming can expect the album to be portrayed live, and they'll be able to see in my facial expressions the emotions of the songs accurately. Also, it will be a chance for me to interact with everyone. They've supported the record, so it will be an opportunity for them to see it in real life. I can't wait.

CC: What do you enjoy the most about this city?

LH: I have some very close friends and loved ones there, including my producer and his family. But I have to say probably my favorite thing is the massive choice of food. I love eating at places people recommend because you can kind of take a chance. The quality is rather high when you go out there. In the U.K. is very different. It's hard to find a really great place. But because L.A. is so big, the choice of food is amazing – all of the countries it comes from and all the culture you get just from the food are amazing. So I love going to L.A. to eat.

CC: What else do you have on your agenda for the next few months?

LH: We'll be doing a tour in the U.S., and we'll visit Canada for three shows. After that, in May, I'll be going back to the studio and start work on my next album. Then I'll be looking forward to a summer of festivals in the U.K., Europe, U.S. and Canada. So lots more live music to be played and some creativity will be afoot.

CC: What advice would you give the youth out there who might want to follow in your footsteps?

LH: If my advice is worth anything at all, I would say that the main thing is to be as honest as you can in the music you're making. You don't have to take that literally – just as long as you feel you're making music that is truly representing who you are as an artist, you'll be truly happy with your art and that will transcend to the people who are listening to it. And ignore ‘genre,’ it doesn’t matter – just make what you think sounds really nice.