Midnight Movies at the Nuart Theatre with Cult Classics and More: Scheduled for March 22 Through May 17 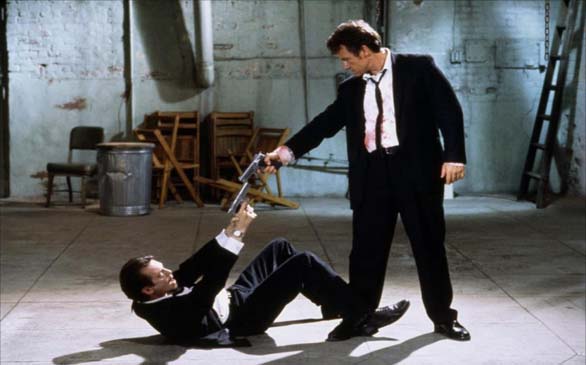 White Zombie: The Restoration is the result of a five-year digital restoration of this gothic horror classic, the very first zombie movie ever made. Restored from a long-lost 35mm print, this is Bela Lugosi's masterpiece. Eerie chanting accompanies the credits as co-star Madge Bellamy arrives at midnight to witness a mysterious burial before coming face to face with the satanic looking Murder Legendre (Lugosi with goatee and searing eyes), a hypnotist and voodoo master. Bellamy becomes the object of desire for Lugosi, whose plan to possess her involves her initiation to the world of the undead. Filmed by the two young brothers Victor Halperin and Edward Halperin in 1932—borrowing sets from Frankenstein, Dracula and The Hunchback of Notre Dame—it shocked audiences with its pre-Code sexuality and storyline, breaking box office records. But then the film and its negative disappeared for over 80 years. Now, looking resplendent on the big screen once more, White Zombie: The Restoration comes to movie theaters worldwide. Also included is the racy pre-Code Betty Boop cartoon "Is My Palm Read?" as well as a 1932 short subject "Intimate Interview with Bela Lugosi" filmed at his Hollywood home during the original production of White Zombie.

Critically acclaimed for its raw power and breathtaking ferocity, Reservoir Dogs is a brilliant American gangster movie classic from writer/director Quentin Tarantino (Django Unchained, Inglourious Basterds, Pulp Fiction, Kill Bill). A wild bunch of crooks and killers—all perfect strangers—are assembled to pull off the perfect crime. But their simple jewel heist explodes into a bloody ambush, and the ruthless killers realize one of them is a police informer. But which one? Starring Harvey Keitel, Tim Roth, Steve Buscemi, Lawrence Tierney and a terrific ensemble cast.

The legend of King Arthur and the Knights of the Round Table receives its most impressive screen treatment in Excalibur, from visionary director John Boorman (Deliverance, Hope and Glory). All the elements of Sir Thomas Malory’s classic Le Morte Darthur are here: Arthur (Nigel Terry) removing the sword Excalibur from the stone; the Round Table’s noble birth and tragic decline; the heroic attempts to recover the Holy Grail; and the shifting balance of power between wily wizard Merlin (Nicol Williamson) and evil sorceress Morgana (Helen Mirren). With Patrick Stewart, Gabriel Byrne and Liam Neeson in notable early screen roles.

The creative team behind The Rocky Horror Picture Show reunite to create what is not so much a sequel but an "alternate universe" spin on the previous film's innocent heroes Brad & Janet. If Rocky Horror trapped the young lovers in a the clichés of sci-fi movies, here they find themselves starring in the even more bizarre (and eerily prophetic) world of reality television, manipulated by a megalomaniacal network president hungry for more than ratings. Rocky Horror stars Richard O'Brien, Patricia Quinn, and Nell Campbell return, with Cliff De Young and Jessica Harper as Brad & Janet, and appearances by Barry "Dame Edna" Humphries, and U.K. comedians Rik Mayall and Ruby Wax.

From the Academy Award-winning Coen Brothers (Fargo, No Country for Old Men) comes a hilariously quirky comedy-thriller about bowling, avant-garde art, nihilistic Austrians and a guy named...The Dude. Jeff "The Dude" Lebowski (Jeff Bridges) doesn't want any drama in his life...heck, he can't even be bothered with a job. But, in a case of mistaken identity, a couple of thugs break into his place and steal his rug (you gotta understand, that rug really tied the room together). Now, The Dude must embark on a quest with his crazy friends to make things right and get that rug back! Co-starring John Goodman, Julianne Moore, Steve Buscemi, John Turturro and Philip Seymour Hoffman.

5/3: Kiss of the Dammed - Extra midnight showing of premiere run!

With her narrative feature debut, writer/director Xan Cassavetes (Z Channel: A Magnificent Obsession) has crafted a stylish, bloody and erotic supernatural tale. Kiss of the Damned is the story of Djuna (Joséphine de La Baume), a beautiful vampire who tries to resist the advances of the handsome, human screenwriter Paulo (Milo Ventimiglia), but eventually gives in to temptation. When her troublemaker sister Mimi (Roxane Mesquida) arrives unexpectedly, Djuna’s love story is threatened and the whole vampire community becomes endangered. Recalling the best and smartest of racy European genre films from the 1960s and 1970s, Kiss of the Damned is the story of vampires trying to find the meaning in everlasting life, and thrillingly contrasts the loveliness and brutality of classic vampire tales. Also starring Anna Mouglalis, Michael Rapaport and Riley Keough. www.magnetreleasing.com/kissofthedamned

High-concept director Robert Zemeckis applies his usual polish -- helped by an equally adept cast -- for this black comedy. The film begins with narcissistic actress Madeline (Meryl Streep) stealing the latest in a series of potential fiancées, wimpy plastic surgeon Ernest (Bruce Willis), from her ex-best friend Helen (Goldie Hawn). The petty rivalry between the two women increases to supernatural proportions due to a magic potion that promises eternal youth.   Dick Smith's Oscar-winning makeup effects, and a hilarious cameo from Sydney Pollack, contribute to some truly inspired moments of dementia.

Every Saturday ‘round midnight: